A day after Attorney General Jeff Sessions announced President Donald Trump’s decision to end a program protecting young immigrants from deportation, immigrants, activists and state attorneys general are lining up against the move. 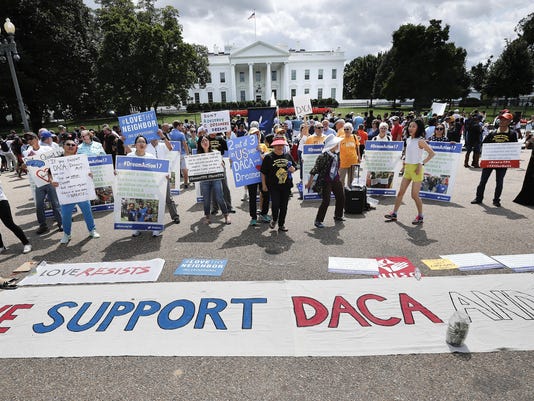 In this Sunday, Sept. 3, 2017 photo, supporters of Deferred Action for Childhood Arrivals program (DACA), demonstrate on Pennsylvania Avenue in front of the White House in Washington. President Donald Trump is expected to announce that he will end protections for young immigrants who were brought into the country illegally as children, but with a six-month delay, people familiar with the plans said. (AP Photo/Pablo Martinez Monsivais)(Photo: Pablo Martinez Monsivais / AP)

“Trump’s actions violate the rule of law,” Shapiro said in announcing Pennsylvania’s addition to the lawsuit. “I am forced to act because of a failure of leadership, both by President Trump and by Congress, to fix our broken immigration system.”

More: Trump’s harsh message to immigrants could drag on economy

Sessions announced Tuesday, Sept. 5, that Trump would “wind down” DACA by giving Congress six months to resolve the status of young immigrants living in the country illegally. After six months, the federal government will stop reviewing new applications for protections under DACA.

Under DACA regulations, young immigrants illegally brought to the U.S. by their parents must pay a $495 application fee, pass background checks, get fingerprinted and turn over personal information, including their home addresses, in order to get a driver’s license and employment opportunities. Shapiro said.

“The federal government made a promise. They put a program in place and asked these young people who have grown up as Americans to apply,” Shapiro said. “The rule of law says we can’t rip that away from them now.”

Young immigrants were asked to register their information without the fear of that information being used against them, but now that is exactly what will happen, Shapiro said.

“A federal government that (asked) these young people to share their personal information … will now break its promise and use that information to deport them,” Shapiro wrote in the lawsuit.

Nearly 5,900 of the 15,000 DACA-eligible Pennsylvania residents have been accepted into the program and more than 5,000 are working and paying taxes, Shapiro said, estimating DACA-eligible immigrants contribute more than $357 million to the economy and pay more than $20 million in state and local taxes each year.

An aide for Perry listened intently as the group of about 20 spoke of their personal experiences with the immigration system and chanted in both English and Spanish for dignity and respect.

The group also delivered a four-point list of demands for Perry, including a full-throated denunciation of Trump for ending DACA and his support for temporary protective status for DACA recipients and a new DREAM Act, said Lydia Walther-Rodriguez, a community organizer with the nonpartisan immigrant service group called CASA.

There is a lot of frustration among immigrant communities, and activist groups such as CASA are trying to ensure that all members of Congress know about that frustration, Walther-Rodriguez said.

In an official statement Tuesday, Sept. 5, Perry called Trump’s decision to end DACA a restoration of balance between the executive and legislative branches regarding immigration policy.

“Congress has abdicated its responsibility on this issue for far too long,” Perry said. “President Trump’s decision should force us to finally develop the consensus necessary to reform our broken immigration system once and for all — and honor our heritage as both a nation of immigrants and the law.”

Nikki Byer, a Newberry Township resident who became an activist in the wake of Trump’s election, said after meeting with Perry’s staff that she doesn’t believe the congressman will backtrack on his support for the end of DACA.

“I don’t think he’s going to be open to these things,” Byer said of the group’s list of demands.

Byer said she believes Trump’s decision to end DACA was just a way to throw more “red meat” to his base of supporters and distract from scandals embroiling the Oval Office.

DACA opponents argue that Trump is fulfilling a campaign promise by ending the program, but Byer said she worries “the red meat has racial overtones to it.”

After a short period of facetime with Perry’s staff, the group organized by CASA left Perry’s office to continue its day of protest at congressional district offices in Lancaster, Harrisburg and across Pennsylvania.

Gonzalez, who was born in the Dominican Republic, serves as a statewide capacity building coordinator for the Pennsylvania Immigration and Citizenship Coalition, based in Philadelphia.