Battle of the businessmen: Wagner and Wolf highlight 2018 race

One York businessman, Scott Wagner, is attempting to unseat another, Tom Wolf, in a gubernatorial race that will highlight their many differences.

Battle of the businessmen: Wagner and Wolf highlight 2018 race

Sen. Scott Wagner, a prominent businessman, sits down with The York Dispatch to discuss, among other topics, the potential for conflicts of interest as he runs for governor. 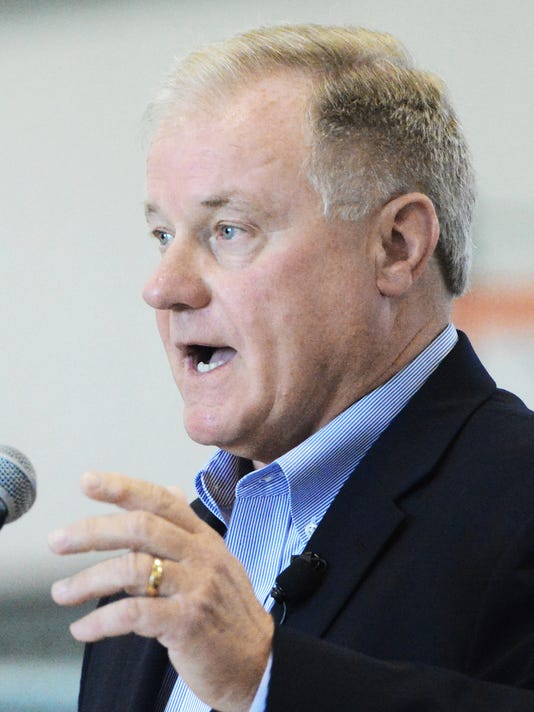 Scott Wagner speaks at a campaign tour kickoff at one of his Penn Waste facilities Monday, July 10, 2017. During the next four to six weeks, Wagner is planning stops across the state to bolster his gubernatorial run. Bill Kalina photo(Photo: , The York Dispatch)Buy Photo

One prominent York County businessman is attempting to unseat another in a gubernatorial race that will be sure to highlight their many differences, including how they address potential conflicts of interest in office.

Incumbent Gov. Tom Wolf used his money and reputation as president and CEO of The Wolf Organization to jump to the top of the Democratic ticket in 2014 and eventually take down former Republican Gov. Tom Corbett after just one term.

Sen. Scott Wagner, most widely recognized as the owner of Penn Waste, won a historic write-in campaign for state senator, largely self-funded, that same year. Earlier this year, he became the first Republican candidate to declare for the 2018 gubernatorial race.

Business in politics: Business leaders entering politics is nothing new, though the trend recently reached a peak with President Donald Trump becoming the first man to jump straight from the business world into the nation’s highest office with no political experience.

Trump’s success has emboldened more businessmen to believe they can take the plunge into politics, according to longtime pollster G. Terry Madonna, of Franklin & Marshall College.

Wagner’s only declared opponent for the Republican primary is Paul Mango, a retired business consultant in Pittsburgh. Mango and his campaign did not respond to an interview request submitted through his campaign website.

“Voters are fed up with the state of politics,” Madonna said, explaining why business leaders have started gaining more traction in elections. “They want reform and change candidates.”

Oddly enough, Wagner — who is running on a platform of major regulatory reforms — would be the first, if elected, to jump from the state Legislature to the governor’s office since George Leader in 1955.

Like Wagner, Leader had represented the 28th Senate District in York County, though he was a Democrat.

More: Super PAC to Wagner: Give us our stuff or else

Madonna said statehouse members traditionally have trouble gaining traction because they only represent small portions of the state, but Wagner has enough personal wealth to buy ads across the state and gain name recognition. 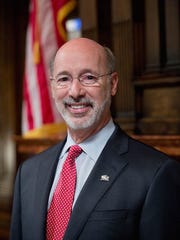 Forty-four states, including Pennsylvania, have refused to give voter information to a Trump Administration voting panel (Photo: Gov. Tom Wolf)

The personal wealth has certainly served Wagner and Wolf well in elections — both their own and in supporting others — but their myriad business interests also leave them susceptible to accusations of conflicts of interest.

Blind trusts: Trump, despite placing his assets in a “blind trust” controlled by his sons, is facing multiple lawsuits for allegedly violating certain provisions in the Constitution by failing to separate himself from his businesses.

After Wolf was elected, he resigned from his titles at his company and placed his assets in a blind trust — though his cousin and former business partner, Bill Zimmerman, did serve as a proxy on Wolf’s behalf when the business was sold.

Wagner serves as president for Penn Waste, Thomasville-based trucking company KBS Inc. and South Carolina-based manufacturer SWJC Inc., in addition to holding other titles at several other companies and many other financial interests.

He told The York Dispatch he would continue operating his businesses if elected and would not consider putting his assets into a blind trust.

Robert Caruso, executive director of the state Ethics Commission, said the state’s Ethics Act does not include any specific restrictions that would prohibit a governor from holding outside business interests.

Jeff Sheridan, spokesman for Wolf’s campaign, said Wolf voluntarily placed his assets into a blind trust in an effort to increase transparency.

Caruso, who has worked at the commission since 1982, said he’s never seen an order issued that found a sitting governor had violated conflict of interest laws.

Eric Epstein, a state government reform activist, said Wolf should be commended for placing his assets into a blind trust, but he understands why someone like Wagner — who has worked a lifetime to accumulate wealth — would be “less than enthusiastic” about that option.

Epstein suggested that current laws are too weak and that there needs to be a third option — beyond placing assets into a blind trust or not — that protects the public without financially penalizing officials.

"If people know it's a condition for the job, it makes implementation a lot easier," Epstein said. “The key is people don’t want personal investments to influence public policy decision-making."

Madonna said he doesn’t believe potential for conflicts of interest is a large concern for voters unless opponents are able to show a direct connection between a candidate’s finances and decisions they make in office.

The main reason business leaders address potential conflicts when entering office is to avoid distractions, Madonna said, pointing out that talk of Trump’s conflicts has kept Congress from moving his agenda.

Potential conflicts: Wagner said the contention that he’s financially benefiting from his elected position is “pure hogwash,” arguing that he’s actually losing money because his work as a senator and on the campaign trail is keeping him from his businesses.

“There’s things occurring at my company that wouldn’t have occurred that have cost us money, or we missed an opportunity 'cause I wasn’t there,” he said.

While he’s best known for his background in the trash business, Wagner’s statements of financial interest, which public officials and employees are required to submit to the state each year, show that he has had business dealings in industries including storage, advertising and even a Costa Rica-based coffee company.

“I will never go around saying I’m an expert, but I’ve got experience in banking, insurance and hiring people and securing customers,” Wagner said. “I’ve got probably 25 different skill sets in my quiver, with my different arrows.”

Wagner promises to aim those arrows at state regulations, which he says continue to choke business growth.

Critics have said eliminating regulations could be a conflict of interest if the process positively impacts his businesses, but Wagner scoffed at those arguments.

Senator Scott Wagner hosts the first stop of his 4- to 6-week campaign tour at a Penn Waste facility in York County.

“It may,” he said when asked whether reducing regulations would personally benefit him, “but what about the other hundred thousand businesses that benefit from the same regulation (reduction)?”

Wagner specifically pointed to workers' compensation reform, which he believes could save businesses in the state up to $5 billion per year.

According to state law, an action by a public official or employee is not considered a conflict of interest if it similarly affects the general public or an industry, occupation or other group.

Epstein said he didn’t consider deregulation to be a conflict of interest for Wagner because that’s just his philosophy, whether he puts his assets into a blind trust or not.

Wagner declined to give details about specific reforms he would propose because he said he fears Wolf will steal his ideas in an attempt to get re-elected.

Asked why he hadn't proposed any legislation addressing these regulations as senator, Wagner said it was because he knew they wouldn't pass with Wolf at the helm.

Wolf, still dealing with budget negotiations, was unavailable for an interview for this story, according to a campaign spokeswoman, but he delivered a statement via email pointing out how he has used his business background to improve the state.

“I have applied my experience as business owner to find savings and efficiencies, cut waste and streamline operations for the commonwealth,” he said in the statement, specifically mentioning the Governor’s Office of Transformation, Innovation, Management and Efficiency (GO TIME).

— Correction: This story has been corrected to clarify that Wolf's cousin and former business partner Bill Zimmerman served as his proxy during the sale of the company but was not authorized to make investment decisions.