At the opening ceremony of the York Fair, Ed "Mr. Ed" Gotwalt walked into the Utz Arena with belt buckles on his... 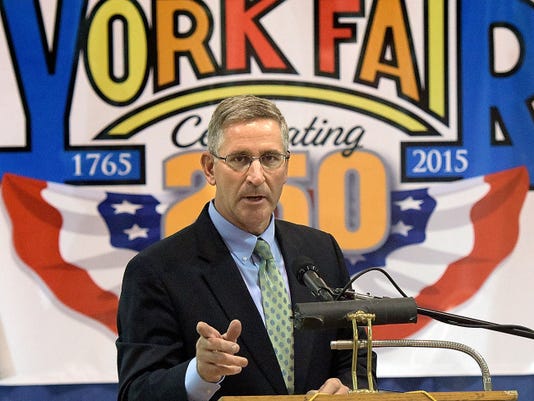 Pennsylvania Secretary of Agriculture Russell Redding speaks during the opening ceremony for the York Fair Thursday at Utz Arena. The anniversary year ceremony included a 1765 ceremonial transfer of charter and a performance by the Central Middle School Fife and Drum Corps.(Photo: Bill Kalina &#8212; bkalina&#64;yorkdispatch&#46;com)

At the opening ceremony of the York Fair, Ed "Mr. Ed" Gotwalt walked into the Utz Arena with belt buckles on his shoes, cane in hand and a white wig on his head.

By day, many know Gotwalt as the founder of Mister Ed's Elephant Museum and Candy Emporium in Gettysburg.

By night, the York native has a second love — moonlighting as an actor.

His role for Thursday: Thomas Penn, the son of Pennsylvania founder William Penn.

There was only one problem.

When asked to play the role for the York Fair, he responded:

What a character: Thomas Penn presented the charter that started the fair in 1765.

Gotwalt recreated the charter presentation as Thomas Penn on Thursday for the event's opening ceremony at the York Expo Center.

Among the rows of cows and sheep, Gotwalt read aloud the proclamation before presenting it to York City Mayor Kim Bracey.

In an effort to "stay in character," Gotwalt said he practiced his walk and a few British words while he was shooting his fourth movie.

Getting the costume involved a little planning.

The pantsuit he wore was donated only recently to his friend's costume collection.

To give the costume charm, belt buckles were added to his regular dress shoes.

The wig came from his role as Santa Claus, and the cane was Gotwalt's personal touch.

"It's what she always says."

Gotwalt insisted on wearing his full costume during the drive to the fair.

Motorists kept staring at him.

"One women forgot to move when the light turned green," he joked.

He planned to be in costume for the rest of the day, and fair attendees will be able to spot Gotwalt walking around during the 10-day event.

He said he'll pose for photos. All you have to do is ask.