In recent weeks, the state's top health official said this type of widespread testing was unrealistic, both because of a lack of supplies and the inaccuracy of tests. 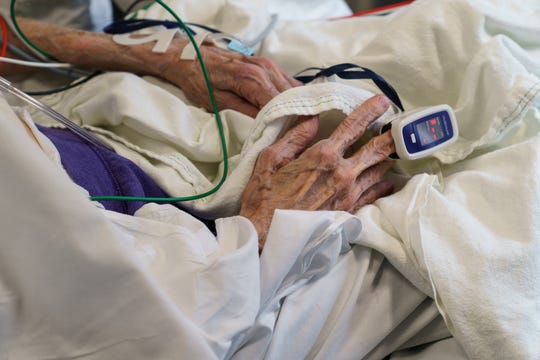 Pennsylvania emergency response officials had a plan to protect nursing homes before the coronavirus swept across the state, but it was never fully implemented. Now, many say the state still isn't doing enough, and what it is doing might be too little, too late. (Photo: JESSICA GRIFFIN / Philadelphia Inquirer)

Spotlight PA is an independent, nonpartisan newsroom powered by The Philadelphia Inquirer in partnership with the Pittsburgh Post-Gazette and PennLive/Patriot-News. Sign up for our free weekly newsletter.

HARRISBURG — The Wolf administration on Tuesday unveiled a plan to begin universal testing of staff and residents in the state’s hundreds of long-term care facilities, which have become the epicenter of coronavirus-related deaths in Pennsylvania.

The announcement is a reversal for the administration, which for weeks has said it did everything possible to protect nursing homes and maintained that only people with symptoms should be tested, despite the known spread of the disease from carriers with no signs of illness.

According to guidance released by the state Tuesday, officials are recommending widespread testing at any facilities with confirmed or suspected cases of COVID-19 to detect potential carriers among residents or staff that could spark an outbreak. At facilities with no confirmed cases, they recommend testing 20% of staff and residents weekly.

More: Pa. had an early plan to protect nursing home residents from the coronavirus, but never fully implemented it

More: Some Pa. counties push to exclude nursing home cases from reopening formula, but experts caution against it

The guidance also suggests facilities retest residents who initially test negative and also urges them not to delay testing residents who are exhibiting symptoms. State officials also provided guidance on how to separate exposed and potentially exposed residents.

Health Secretary Dr. Rachel Levine said the testing would be conducted by the state lab in Exton in partnership with private labs and mobile testing facilities provided by the National Guard.

“This effort will give us a clearer picture of the extent of outbreaks in nursing homes and a head start at stopping them,” Levine said.

In recent weeks, Levine said this type of widespread testing was unrealistic, both because of a lack of supplies and the inaccuracy of tests.

“It is not clear universal testing is the answer,” Levine told the Senate last Thursday.

Also last week, state health officials released information for families with loved ones in nursing homes, indicating residents should only be tested after two symptoms of the virus had been identified, and after a test for the flu had come back negative.

But officials changed their tune Tuesday morning, when Gov. Tom Wolf told reporters the state would implement a “fairly radical” plan to conduct surveillance testing “once a week for everybody — employees and patients and clients.” The guidance, however, did not specifically say all testing would occur once a week.

As of Tuesday, Pennsylvania had reported 12,130 cases of COVID-19 inside 540 long-term care facilities. More than 2,600 residents have died.

The reversal comes after a Spotlight PA investigation published Saturday found the state had a robust plan to protect nursing homes from the coronavirus but never fully implemented it and has since resisted calls to take the kind of action the administration is now proposing.

Other states committed to widespread testing at nursing home facilities weeks ago.

In late April, Maryland Gov. Larry Hogan ordered universal coronavirus testing at nursing homes, including all staff and residents, regardless of whether they had symptoms. The governor also mandated a daily evaluation of all residents. Massachusetts, West Virginia and Tennessee have also prioritized testing.

Over the weekend, New York state followed suit, with Gov. Andrew Cuomo announcing nursing home staff would be tested twice each week. New Jersey said Tuesday that all residents and staff will be tested for the virus by the end of May.

Also Tuesday, Pennsylvania Attorney General Josh Shapiro announced that criminal investigations had been launched into several nursing homes, and he urged those with concerns about criminal conduct to contact his office.

“Active criminal investigations are already underway and we encourage people to share relevant complaints with us on our special tip line so we can best protect people in nursing homes,” Shapiro said in a statement.

In late April, Sen. Dan Laughlin, R-Erie, asked Levine why every person at long-term care facilities was not being tested, despite the widespread understanding of how vulnerable residents and staff are at such homes.

Levine at the time said it would be virtually impossible to conduct widespread testing on a daily or even weekly basis for all staff, saying there were insufficient supplies and too high a rate of false results. A more viable testing solution would be at least six months off, she said then.

“Right now, testing everyone who walks in the building every day, we really can’t do that,” she said.

At a Senate hearing last week, Levine walked that back slightly, saying that testing capacity had improved and the department was rethinking its testing strategies.

“Until the past two weeks there have been significant constraints in terms of testing,” she said at the hearing.

Still, a number of lawmakers questioned why the department had not taken steps sooner to address the unfolding death toll at long-term care facilities.

In response to Spotlight PA’s reporting, Sens. John Yudichak, I-Luzerne, and Judy Ward, R-Blair, on Tuesday sent a letter to Levine asking the administration to provide the plan it intended to implement in March and information about the discussions within the agency that prevented the plan from occurring.

What the administration knew early in the crisis, but failed to act on, speaks to “the lack of an efficient response as it relates to not only the public health, but the economic health as well to Pennsylvania citizens,” the senators wrote.

— Spotlight PA receives funding from nonprofit institutions and readers like you who are committed to investigative journalism that gets results. Give a gift today at spotlightpa.org/donate.