Unemployment claims in Pa. and N.J. surge in wake of the coronavirus

Pennsylvania officials received 120,000 claims for unemployment benefits in the space of two days — more than half of what they received in the entire first quarter of 2019.

Unemployment claims in Pa. and N.J. surge in wake of the coronavirus 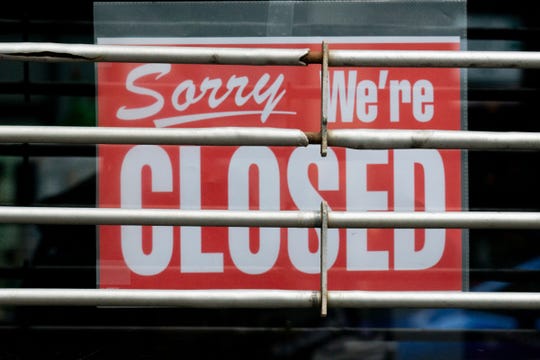 The wave of business closings and cancellations amid the coronavirus crisis is causing massive job losses and a sharp spike in claims for unemployment compensation in Pennsylvania and New Jersey.

In the past few days, as the coronavirus’s spread led Pennsylvania Gov. Tom Wolf to order a statewide shutdown, state officials have received 120,000 claims for unemployment benefits — more than half of what the state reported for the entire first quarter of 2019, according to state and federal data.

State labor and industry officials said 50,000 people filed for benefits on Monday, the day the governor extended his shutdown order for nonessential businesses to all 67 counties. By Tuesday, another 70,000 people had submitted claims.

In New Jersey, the online system for filing claims crashed Monday, as a record 15,000 people flooded it with applications, labor officials there said. The labor department normally handles between 1,500 and 2,300 applications on a given day.

“This is absolutely devastating,” said Nick Buccino, 31, who lost his hours as a waiter at a North Jersey restaurant this week. He said he knows college students, single moms, immigrants who work kitchen jobs — all urgently in need of jobless benefits.

“It’s rough. A lot of people are going to be absolutely destitute because of this,” Buccino said.

More: Report: First man to die from coronavirus in Pennsylvania ID'd by family

In Pennsylvania, John Dodd, director of the Philadelphia Unemployment Project, a seven-person nonprofit, said he is concerned about whether the state will be able to handle the influx of new applications.

“Unless they’re gearing up tremendously, which they should, they’re going to have a terrible problem,” he said.

Pennsylvania and New Jersey officials could not immediately provide a breakdown of where the job losses have occurred.

In Pennsylvania, state labor officials did not respond to questions about whether they were beefing up staffing levels to process the new claims, or how long they believed it would take to let people know about qualifying for benefits. Earlier in the week, the Wolf administration said it was eliminating the usual one-week waiting period to receive benefits.

Labor officials in both states, however, urged residents to apply online, saying it will greatly speed up the process. Angela Delli Santi, spokesperson for the New Jersey Department of Labor & Workforce Development, said Wednesday that the online site was back up and running after the state added “more capacity” to the system in the wake of Monday’s meltdown.

Buccino said he set his alarm for 3 a.m. Tuesday to “try to beat other people to the punch" in filing online for unemployment insurance.

"It just kept freezing out and crashing over and over again and no one could get through,” Buccino said. “I know a lot of people gave up on it. ... I finally brute-forced my way through. I had to keep slamming refresh.”

Delli Santi said New Jersey’s processing times will depend on volume and whether the applicant filed a complete form, with no missing information, and applied for the right program. She asked people to be patient.

People should not “worry if they have trouble getting through," she added.

"Their claim will be backdated so they will not lose a week’s benefit,” Delli Santi said. “The labor department wants everyone to receive every penny they are entitled to.”

The jobs crash caused by the impact of the coronavirus has been hard and swift: Before the public health emergency, both states enjoyed relatively low unemployment rates. Pennsylvania’s was 4.7% in January; New Jersey averaged a rate of 3.6% in 2019.

Wolf’s statewide shutdown order went into effect at 12:01 a.m. Tuesday and will last for two weeks. It applies to all nonessential businesses such as hair and nail salons, gyms, retail malls and stores, movie theaters, concert halls and other entertainment venues. The governor also shut down schools statewide.

In New Jersey, Gov. Phil Murphy issued a similar directive for businesses and schools, and on Monday he recommended a statewide curfew between 8 p.m. and 5 a.m.

In Pennsylvania, businesses leaders said the travel and hospitality industries have been hit the hardest during the first few days of the shutdown. State labor data shows those industries also employ the most people.

The “Health Care and Social Assistance” industry topped the list, with an average of 1,092,125 workers between July and September of 2019, followed by the retail, manufacturing, and “accommodation and food services" sectors.

Bars and other food service businesses employ 420,000 workers statewide, with 55,185 people working for more than 4,500 bars and restaurants in Philadelphia alone, the data shows.

Restaurant worker Shannara Gillman, of Hopewell, New Jersey, in Mercer County, is one of them. In an interview Wednesday, she said she tried to get ahead of the deluge on Monday night after employees at her restaurant learned that in-table service would end at 8 p.m.

As soon as she got home, she went online and tried to file for unemployment insurance, she said.

“The website was running really slow. It was timing out,” she said.

“Unfortunately, the New Jersey online system doesn’t save your progress, so that happened to me several times where I would get so close to the end and I’d be like, 'I have one step left,’ and it would get stuck and then time out and then I’d have to log back in. And everything I had done up until that point was lost,” Gillman, 42, said.

Gene Barr, the president of the Pennsylvania Chamber of Business and Industry, put it this way when asked about the crisis’s impact on workers and the potential for more job losses: “We are in a situation we have never encountered before. It’s a playbook we are writing as we go."

Pennsylvania’s unemployment compensation fund started the year with a $3.4 billion balance, according to the U.S. Department of Labor. New Jersey had a $2.8 billion balance as of Jan. 1.

It is unclear how long the funds’ balances will last, given the crush of applications for unemployment benefits. Barr noted that Pennsylvania just this January paid off the last of the $2.8 billion in bonds it issued in 2012 to retire a post-recession unemployment compensation debt that businesses owed to the federal government.

Under the program, loans of up to $100,000 will be available for small businesses to use as working capital. Though details are still being ironed out, state officials said there will be no application fees, and businesses will not have to make payments during the first year of the loan.

— Spotlight PA is an independent, nonpartisan newsroom powered by The Philadelphia Inquirer in partnership with the Pittsburgh Post-Gazette and PennLive/Patriot-News. Sign up for our free weekly newsletter.

— 100% ESSENTIAL: Spotlight PA provides its journalism at no cost to newsrooms across the state as a public good to keep our communities informed and thriving. If you value this service, please give a gift today at spotlightpa.org/donate.