At least 20 states have started using church-released lists of priests and employees who faced credible allegations to screen applicants or check for current state teaching, foster care and therapy licenses — and, in some cases, have revoked credentials.

FILE - In this Tuesday, Aug. 14, 2018 file photo, those affected by clergy sexual abuse comfort each other as Attorney General Josh Shapiro speaks at a news conference in the State Capitol Building in Harrisburg, Pa. The landmark grand jury report looked at how abuse allegations were handled in six dioceses. (Steve Mellon/Post-Gazette via AP) (Photo: Steve Mellon, AP)

In the wake of revelations that scores of Roman Catholic priests and religious workers credibly accused of child sexual abuse are living unsupervised in communities across the country, state officials face a quandary: Should they screen former clergy members who seek licenses for jobs that put them in contact with children? And, if so, how?

Since then, at least 20 states have started using church-released lists of priests and employees who faced credible allegations to screen applicants or check for current state teaching, foster care and therapy licenses — and, in some cases, have revoked credentials.

As part of the church's attempt to be more transparent about its ongoing sexual abuse crisis, more than 170 dioceses and religious orders have publicly released lists of clergy members they found to be credibly accused of abuses ranging from rape to child pornography.

Over 5,300 priests, clergy members and a handful of lay employees — more than 2,000 of them still living -- are on the lists. But because most were never convicted of a crime, the allegations of child abuse never appeared in licensing background checks, the AP's investigation revealed.

Church and law enforcement officials have said there is little they can do to monitor or restrict the nearly 1,700 mostly former clergy members the AP found living without supervision because many voluntarily left the church or were laicized, which means they are permanently restricted from the priesthood and return to private citizenship.

For close to two decades, the group Survivors Network of those Abused by Priests has been advocating for church officials to report allegations to law enforcement, child protection and other state agencies, but it says state agencies haven't figured out their role in responding to the clergy abuse scandal.

"These agencies need to refocus their priorities," said David Clohessy, the former executive director of SNAP, who now leads the group's St. Louis chapter. "They're here to protect the public from predators, not to make getting a license to be a shrink or doctor easier."

AP reporters called agencies in all 50 states, determining that dozens have started discussions, checked their lists of licenses for named clergy or begun using the diocesan lists released in their areas to flag applications. 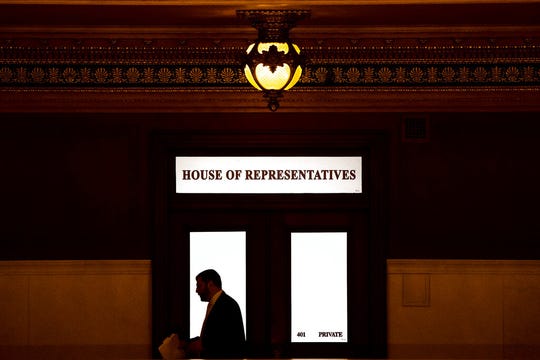 FILE - In this Nov. 20, 2019 file photo, a lawmaker is silhouetted as he walks past a window in the Pennsylvania Capitol in Harrisburg, Pa. While most states have not yet considered law changes to screen former clergy members who seek licenses for jobs that put them in contact with children, at least 20 state attorneys general are conducting investigations of how church officials handled abuse allegations, including reporting them to civil law enforcement, largely in the wake of the Pennsylvania attorney general officeâ€™s 2018 grand jury report that looked at how abuse allegations were handled in six dioceses. (AP Photo/Matt Rourke, File) (Photo: Matt Rourke, AP)

The license reviews and background check changes have come across all areas of state licensing -- from foster care to education boards.

In Ohio, Gov. Mike DeWine ordered the state Department of Job and Family Services to review how county-level child service agencies and private placement agencies could incorporate the diocesan lists into background checks used to determine where children are placed. A spokesman for DeWine said the directive came after the AP published its investigation, calling the action "warranted to protect Ohio's children."

Conducting a comprehensive review is complicated because no official national master database of accused clergy exists, meaning states have to choose how many of the more than 170 lists to consult.

Pennsylvania's education licensing department has conducted perhaps the most comprehensive search of its licensing database, checking for nearly 500 clergy members' names that were released in three state or local grand jury reports over the last decade.

The department revoked or accepted the surrender of three licenses from former clergy members and is investigating a dozen other licensees. But the first effort did not encompass lay church employees named on diocesan lists and former priests who might have moved to Pennsylvania from other states and sought licenses.

Dylan Klapmeier, spokesman for the Montana Department of Public Instruction, said his agency checked its list of credentialed teachers against the names issued by two Montana dioceses and found no matches. He lamented the lack of a national list to further consult, noting that "there are lots of places to hide here."

For many education or licensing departments, using the diocesan lists can be difficult because of state statutes governing what can be considered when deciding to issue or revoke a license. Some agencies allow only for criminal background checks, while others also permit a check of the state's child abuse and neglect database.

A half-dozen child and family services departments responsible for licensing and screening foster parents — including those in New Hampshire, Oklahoma and New Mexico — told the AP that they have checked the local diocesan lists to see if any former priests were approved foster care providers.

Among license-providers, it's easiest for state education departments to use the lists to remove licenses or background new applicants.

At least 20 state educational licensing agencies the AP contacted had checked the credibly accused clergy lists released in their states against the rosters of licensed school workers, with at least eight finding former priests with active or expired licenses. Many of those states have acted to remove those licenses or put holds on them to prevent their renewal.

While most states have not yet considered law changes, at least 20 state attorneys general are conducting investigations of how church officials handled abuse allegations, including reporting them to civil law enforcement, largely in the wake of Pennsylvania's 2018 grand jury report.

In its 50-state review, the AP asked the attorneys general if they had considered how states could use the lists of credibly accused clergy members to better protect children.

Some said they wanted to focus on investigating any possible criminal charges, but others said they have started to consider the role they could play in eliminating the gray area for people who have been credibly accused but not prosecuted.

The AP investigation published in October explored the case of former priest Roger Sinclair, who had been accused of abuse in at least two other states but who had never been criminally charged when he moved to Oregon, where he was arrested and convicted for abusing a vulnerable adult.

"This AP story … sheds light on an important aspect of clergy sexual abuse horrors —how easy it has been to continue the abuse in other states from where the initial offending conduct occurred," Rosenblum said. "That is absolutely unacceptable, and the fact that the Sinclair case occurred right here in Oregon drives home the importance of addressing this issue."