Critics say applicants to fill judicial vacancies and their qualifications should be posted online for public review. 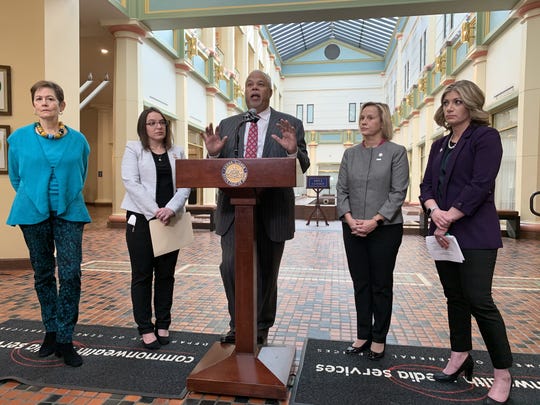 HARRISBURG — The state Senate recently confirmed Gov. Tom Wolf’s controversial pick to fill a vacancy on a statewide appellate court, even as a group of senators criticized the secrecy surrounding the judicial nominating process and said they will introduce a bill to make it more transparent.

Drew Crompton, 51, the top lawyer and strategist to the lead Republican in the Senate, cleared the final hurdle Dec. 18 to fill a vacant spot on the state’s Commonwealth Court, which hears cases involving government agencies.

His nomination in November sparked an outcry among some Democrats, who criticized it as a blatantly political choice and questioned his qualifications and impartiality. The pick renewed concerns about Pennsylvania’s judicial nominating process, which unfolds almost entirely behind closed doors.

“It is a system that is dangerous, corrosive, antiquated and doesn’t meet the standard if we want the best people on the bench,” Sen. Anthony Williams, D-Philadelphia, said at a news conference.

Williams is one of four senators who said they will introduce a bill to make the process more transparent. The measure would require the governor’s office to publicly post on its website the names of all applicants for a judicial vacancy, as well as the extensive paperwork they must fill out when they apply.

» SIGN UP for Spotlight PA’s free weekly newsletter, The Investigator, and receive exclusive, behind-the-scenes looks at our work, plus a roundup of only the best journalism across Pa.

The public would then have 30 days to comment on the applications before the governor decides who to nominate. That would be followed by a televised public hearing that includes a question-and-answer session with the nominees.

As it stands now, when a vacancy occurs on the bench, the governor solicits applications to fill the positions but does not make them public. Instead, the administration, together with the top Senate leaders from both parties, eventually hammers out a deal behind closed doors — and with no public input — on who to ultimately nominate to fill the spots.

By the time the nominations are sent to the Senate, which must approve them, the votes have been shored up and the confirmation process becomes largely ceremonial.

It is unclear whether the Democratic senators’ proposal has a chance of passing. Jennifer Kocher, the spokesperson for Senate Majority Leader Jake Corman, R-Centre, said Republicans would review the measure once it is formally introduced. Wolf’s office said it is “open” to discussing reforms.

But historically, the Legislature has turned a deaf ear on calls for changing the system for how judges are chosen.

Wolf, a Democrat, has been largely silent on why he chose Crompton, a Republican lawyer who has worked in the Senate for 26 years. For much of that time, Crompton has been a key strategist for the Senate Republican caucus’s policy and politics, serving as both chief counsel and chief of staff to Senate President Pro Tempore Joe Scarnati, R-Jefferson.

In his position, Crompton weighs in on nearly every significant piece of legislation pushed by Republicans in the chamber. He has helped draft hundreds of key policies on everything from the environment to education to elections.

He has also been deeply involved in handling some of the Senate’s messiest personnel problems, including a recent sexual harassment scandal in which Republicans, in a controversial move, quietly decided to pay the legal bills of the person accused of harassment.

During his years in the Capitol, Crompton has amassed both loyal supporters and fierce critics. The former believe he is smart and will bring a thoughtful, reasoned approach to the bench. His critics take aim at his lack of judicial experience and believe it will be difficult for him to be impartial.

During a hearing in the Senate Judiciary Committee on Wednesday, Dec. 18, Crompton said he would recuse himself “when warranted.” Pressed to elaborate, he said he would step away from deciding any cases involving laws or policies he has been closely involved in drafting.

He also pushed back on criticisms that he is too partisan, saying much of his work in the Senate involved “bipartisan work on behalf of the institution of the Senate, on behalf of the legislative branch and sometimes in conjunction with the executive branch, Republican or Democrat.”

“Some of this does, in fact, come down to integrity," Crompton told members of the committee. "... I believe the people who have worked closest with me understand the integrity that I have operated with for two decades. And I plan on taking my personal integrity to the judicial branch and separating myself from my prior life.”

Once he is sworn in, Crompton will serve until 2021, at which point he will have to decide whether to run for a full term.

— Spotlight PA is an independent, nonpartisan newsroom powered by The Philadelphia Inquirer in partnership with the Pittsburgh Post-Gazette and PennLive/Patriot-News. Sign up for our free weekly newsletter.

Spotlight PA receives funding from nonprofit institutions and readers like you who are committed to investigative journalism that gets results. Become a Founding Donor today at spotlightpa.org.