One of the top stories of 2018 – the Pennsylvania grand jury report on clergy sex abuse and the Roman Catholic Church’s efforts to cover it up – continued to reverberate strongly in 2019. 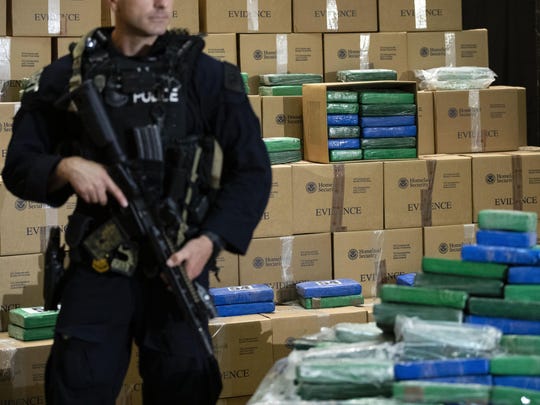 FILE - In this June 21, 2019 file photo, an officer stands guard over a fraction of the cocaine seized from a ship at a Philadelphia port that was displayed at a news conference at the U.S. Custom House in Philadelphia. Federal law enforcement officials raided a container ship at Philadelphiaâs port and discovered more than $1 billion worth of cocaine, one of the largest caches ever intercepted on U.S. shores. (AP Photo/Matt Rourke, File) (Photo: Matt Rourke / AP)

One of the top stories of 2018 – the Pennsylvania grand jury report on clergy sex abuse and the Roman Catholic Church’s efforts to cover it up – continued to reverberate strongly in 2019.

After years of delay and debate, Pennsylvania revamped its child sexual abuse laws to make it easier for some victims to sue and for police to file charges. The legislation, signed by Democratic Gov. Tom Wolf last month, was approved more than a year after the grand jury found that senior church leaders concealed abuse by hundreds of Catholic priests since the 1940s.

Catholic dioceses from Erie to Philadelphia, meanwhile, launched compensation funds and paid tens of millions of dollars to hundreds of abuse victims.

The ongoing clergy abuse scandal was among the top Pennsylvania stories of 2019. The state’s key role in the upcoming presidential election, a decision to seek the death penalty in the Pittsburgh synagogue massacre, and things that went boom (and bust) were some others.

The 2020 presidential election campaign got underway as former Vice President – and Scranton native – Joe Biden launched his candidacy in Philadelphia. President Donald Trump, hoping for a repeat of his 2016 victory in battleground Pennsylvania, made four trips to the state this year.

More: 2 charged in fight over wrapping gifts for other boyfriend

The November off-year election saw Democrats sweep Philadelphia’s populous suburbs, traditionally a bellwether for statewide candidates. Voters approved a referendum to enshrine rights for crime victims in the state constitution, but a legal challenge threatened to derail the effort.

Most counties debuted new voting machines mandated by the Wolf administration in an effort to improve election security.

Federal prosecutors announced in August they would seek the death penalty for a man charged with killing 11 people inside a Pittsburgh synagogue.

Robert Bowers had offered to plead guilty in exchange for a life sentence.

The former truck driver is charged with hate crimes and other offenses in the deadliest attack on Jews in U.S. history. Authorities said Bowers expressed hatred of Jews during and after the October 2018 rampage at Tree of Life synagogue.

No trial date has been set.

The Pittsburgh City Council tried imposing new gun restrictions in the wake of the massacre, but a judge struck the legislation down in October, noting that Pennsylvania state law forbids municipalities from regulating firearms. City officials vowed to appeal.

Whether old or new, the state’s energy infrastructure was in the news for all the wrong reasons.

On June 21, a blaze and a series of explosions shook homes and caused extensive damage at Philadelphia Energy Solutions’ oil refinery, the largest on the East Coast. The company shuttered the 150-year-old site and laid off workers. Federal investigators blamed an aging elbow pipe that hadn’t been inspected in decades.

In November, The Associated Press reported that the FBI had launched a corruption investigation into how the Wolf administration issued permits for construction on the problem-plagued Mariner East pipeline.

Jerry Sandusky’s bid for a reduced prison term was thwarted after a judge gave him the same sentence, 30 to 60 years, that was imposed in the wake of his 2012 conviction for sexually abusing children. An appeals court had ordered a new hearing for the former Penn State assistant football coach.

Another figure in the Sandusky scandal won a reprieve when a federal judge threw out the child endangerment conviction of former Penn State President Graham Spanier just hours before he was to start serving a two-month jail sentence.

In March, a jury cleared a white police officer of homicide in the fatal shooting of black teenager Antwon Rose II outside Pittsburgh, in a case that sparked weeks of unrest. Rose’s family settled its civil rights suit for $2 million.

On the other side of the state, federal law enforcement officials made the bust of a lifetime when they raided a container ship at Philadelphia’s port and discovered more than $1 billion worth of cocaine, one of the largest caches ever intercepted on U.S. shores.

Philadelphia rapper-turned-criminal justice reformer Meek Mill pleaded guilty to a misdemeanor gun charge, resolving a 2007 criminal case whose twists and turns had kept him on probation or in prison for most of his adult life.

It wouldn’t be Pennsylvania without a public official or five free-falling from grace.

The mayor of Scranton, Democrat Bill Courtright, resigned from office and pleaded guilty to shaking down businesses for bribes and campaign contributions.

Republican state Sen. Mike Folmer of Lebanon County was charged with having child pornography on his cellphone. He faces trial next year. State Rep. Brian Ellis, a Republican from Butler County, was accused of sexually assaulting a woman four years ago. Following a grand jury’s recommendation, prosecutors opted not to bring a case.

Rep. Movita Johnson-Harrell, a Democrat from Philadelphia, was charged with stealing $500,000 from charity and spending it on fur coats, a Porsche and travel to Mexico and Florida. She disputed many of the allegations while acknowledging “some missteps.” She resigned, too.

And in Philadelphia, a city councilman and a powerful union boss were indicted on bribery charges.

Former Pennsylvania Attorney General Kathleen Kane, meanwhile, got out of prison after serving eight months for leaking grand jury material and lying about it.

Investing legend John Bogle, the Vanguard Group founder who launched the first index mutual fund, died at 89. Pennsylvania’s unemployment rate hit a record low of 3.8% in April before drifting back up to more than 4% later in the year. Five children died in a fire at a home-based day care center in Erie. The 21-story former world headquarters of defunct steelmaker Bethlehem Steel was demolished.