Talks on Pennsylvania’s minimum wage heat up before deadline

Discussions on raising Pennsylvania’s minimum wage for the first time since 2009 are heating up, in part to get Gov. Tom Wolf to abandon an effort to extend overtime pay eligibility to tens of thousands of addi

Talks on Pennsylvania’s minimum wage heat up before deadline

HARRISBURG – Discussions on raising Pennsylvania’s minimum wage for the first time since 2009 are heating up, in part to get Gov. Tom Wolf to abandon an effort to extend overtime pay eligibility to tens of thousands of additional workers.

Negotiators are up against a Thursday deadline, when a state rule-making board is scheduled to vote on an overtime regulation proposed by Wolf.

If Wolf, a Democrat, is to get the Republican-controlled Legislature to agree to raise Pennsylvania’s minimum wage, he’ll have to make concessions, including rescinding the overtime proposal.

The increase under negotiation is far more modest than what Wolf proposed in January when he pushed for a multi-year increase to $15 an hour in 2025. 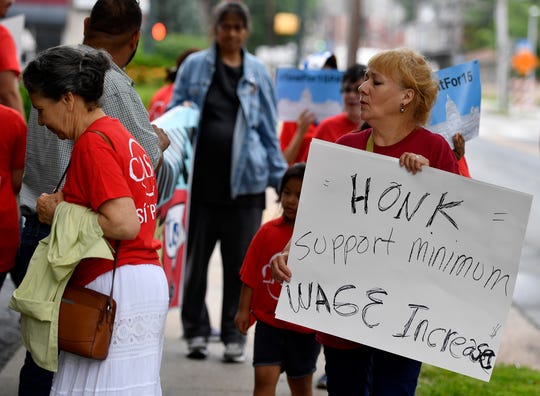 The discussion revolves around increasing the minimum wage to around $9.50 an hour in steps over 18 months or so, while Wolf would have to drop elements of his January proposal. Those elements include eliminating Pennsylvania’s tipped wage minimum, now $2.83, and boosting the rate annually starting in 2026 so it keeps pace with inflation.

Such concessions may be tough to swallow for many Democratic lawmakers and labor unions.

“I think workers deserve more, I think that people that work for a living deserve better from our government,” said Wendell Young IV, president of the United Food and Commercial Workers Local 1776, based in suburban Philadelphia. But, he said, “if you have an unmovable conservative bloc that won’t do much or anything, it’s important to get what we can for those workers. But that doesn’t mean that it’s enough.”

One key player in the discussions is the Pennsylvania Chamber of Business and Industry, which, like most Republican lawmakers, has long opposed an increase in the minimum wage.

However, it effectively views a minimum wage increase that puts Pennsylvania in the middle of the pack among states as the lesser of two evils. Wolf’s overtime proposal would impose unsustainable cost increases on businesses, nonprofits and colleges, it says.

Wolf’s office would say only that talks were ongoing Friday, while leaders of the Senate’s Republican majority said negotiators must compromise for a bill to pass the chamber.

“If people want to be reasonable, we can get something done,” said Senate President Pro Tempore Joe Scarnati, R-Jefferson.

Senate Majority Leader Jake Corman, R-Centre, said getting Wolf to drop the overtime regulation is a “tradeable item” that makes Thursday’s vote on it an important deadline.

Failing to get Wolf to rescind the overtime regulation before Thursday would scuttle negotiations at least for a while, Corman said.

“If that is no longer a possibility, something else would have to replace it and I don’t know what that would be,” Corman said.

The federal minimum wage was last increased to $7.25 an hour in 2009. Currently, Pennsylvania is one of 21 states whose minimum wage is set at the federal minimum, while half of the 50 states have authorized an automatic future wage increase of some sort. About 385,000 people in Pennsylvania hold a job that pays between $7.25 an hour and $9.50 an hour, according to the state Department of Labor and Industry.

Any bill would have to pass the Republican-controlled House of Representatives, where top Republicans have never said they were open to increasing Pennsylvania’s minimum wage.

The proposed overtime rule would expand overtime pay eligibility to 82,000 workers who earn above a new federal threshold that’s rising to almost $36,000 on Jan. 1, Wolf’s administration has said. Pennsylvania’s total nonfarm payrolls are just above 6 million.

It would phase in the increase over three years and require in 2022 that salaried workers earning up to $45,500 a year get time-and-a-half pay for any time they work over 40 hours in a week.

Pennsylvania’s current threshold is set at the federal baseline of $23,660, although the administration said the rising federal threshold will make 61,000 workers in the state newly eligible for overtime pay.

The current threshold took effect in 2004.