Gov. Tom Wolf and state Treasurer Joe Torsella celebrated Tuesday with what they said will be Pennsylvania’s largest deposit into its budgetary reserve account in nearly two decades. 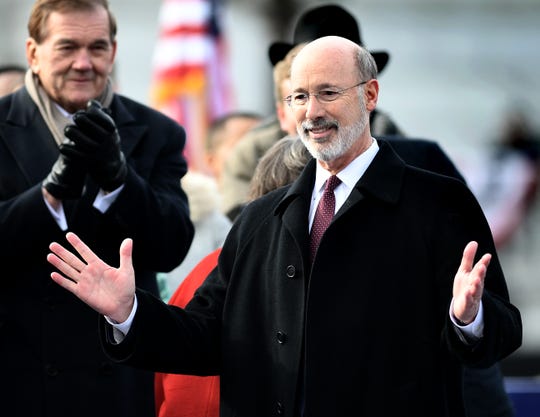 HARRISBURG – Gov. Tom Wolf and state Treasurer Joe Torsella celebrated Tuesday with what they said will be Pennsylvania’s largest deposit into its budgetary reserve account in nearly two decades.

The expected $317 million comes after strong corporate and sales tax collections drove the state past its revenue expectations by almost 3%. It also marks Pennsylvania’s strongest stretch of tax collections since the recession a decade ago, bringing a reprieve from a string of tight budget years and deficits.

All told, Pennsylvania will have about $340 million in reserve, enough to run state government for a few days. That’s well short of the median of 23 days among states, Torsella said.

The state collected a total of $34.9 billion for its main operating account in the just-ended fiscal year. That exceeded projections by $883 million, although most of that extra cash was needed to cover cost overruns.

Still, not every outlook for the state is rosy, and it still has its share of fiscal challenges.

Pennsylvania’s stronger-than-expected tax collections can largely be traced to sales and corporate taxes.

Over the last several years, Pennsylvania has expanded its 6% sales tax to more online transactions, including digital downloads and third-party sales in online marketplaces. That helped fueled growth of better than 6% in the 2018-19 fiscal year, analysts say.

Meanwhile, businesses appeared to be delaying profit-reporting from 2016 and 2017 into the 2018 tax year to capitalize on lower federal tax rates, said Matthew Knittel, of the Independent Fiscal Office, a legislative agency. That helped boost corporate tax collections, to an approximately 12 percent increase.

Pennsylvania suffered a string of downgrades by the big three rating agencies that took a dim view of its post-recession efforts to avoid a tax increase by relying on one-time cash infusions. That left Pennsylvania among the bottom-ranked states and paying a higher price on its debt.

One persistent criticism was Pennsylvania’s bare budget reserve, and the robust deposit could help improve the state’s credit profile and give it a way to borrow money and refinance debt at a lower interest rate.

“Bond-rating agencies will take note of our savings as a sign of our financial preparedness and an increased bond rating would bring us even further savings, and I’m hoping that they see things the way I do,” Wolf said.

Payrolls were at a record high in May, the unemployment rate was a record low and the 2019-20 fiscal year that began July 1 is expected to be another relatively strong year for tax collections. Growth is projected at 3% and Wolf’s office expects $350 million left over at the end of the 12 months.

Pennsylvania state government is facing a demographics crunch that is expected to strain budget-making in the coming years.

That effectively means Pennsylvania’s tax collections will slow as more people leave the workforce while the rising cost to care for the elderly will put more strain on state services.

Pennsylvania had a projected $67 billion in debt in its two large public pension systems, as of the last valuation. The state government is budgeted to pay about $3.5 billion into the two systems in the new fiscal year, but it’s not paying any more than is required.

The systems for state government employees and public school employees had among the lowest funding levels among state pension systems, at under 60 percent, based on 2017 figures.