Pennsylvania’s colleges and universities have a year to develop online, anonymous reporting systems to receive complaints about sexual assault from students and employees. 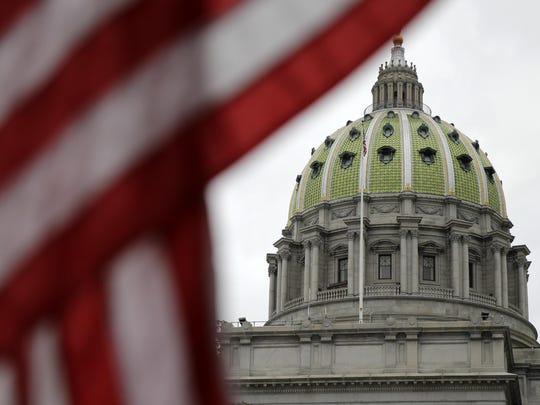 HARRISBURG – Pennsylvania’s colleges and universities have a year to develop online, anonymous reporting systems to receive complaints about sexual assault from students and employees.

Gov. Tom Wolf, appearing with the law’s backers in the It’s On Us campaign, said Monday that the law he signed is the first of its kind in the nation.

“I want to make sure that everybody in the United States and in the world knows that, if you come to colleges or universities in Pennsylvania, this is a place that you can feel free of the threat of sexual violence,” Wolf said during a news conference in his offices.

Victims tend to report their assault much more quickly when they can report anonymously, compared with when they report it in person, said Tracey Vitchers, executive director of the It’s On Us campaign.

The law  requires colleges and universities to excuse witnesses or victims who report sexual assault from any violation of the institution’s student conduct policy on the use of drugs or alcohol.

The requirements were in legislation Wolf signed late last month, amounting to three pages in a wide-ranging, 45-page education policy bill that lawmakers passed in a flurry of votes on hundreds of pages of budget-related legislation.

Reports, including anonymous reports, must be investigated according to a policy that the law also requires each college or university to write.

Vitchers said many schools already have online, anonymous reporting systems, and Pennsylvania’s biggest universities are included in that.

Temple University launched its system in 2017, with support from a grant through a state program that is going into its fourth year under Wolf’s administration. Penn State said it introduced a system in 2012, and the University of Pittsburgh said it launched a system in 2016. The Pennsylvania State System of Higher Education was checking this week to see how many of its 14 universities offer some form of online, anonymous reporting for sexual assaults, a spokesman said.

Such reports typically go to a school’s Title IX office.

“I am fully supportive of this legislation,” said Penn State York Chancellor David Christiansen. “I think this is a wonderful step forward by the state to protect the rights of all students.

Christiansen said all 24 of Penn State’s campuses are already “fully compliant” under the new legislation. Penn State York instituted an online reporting system along with PSU’s other campuses around 2012 — and a link to the hotline is displayed at the top of every page on the PSY website.

“It’s something we believe in very strongly,” he said.

“Unfortunately, an anonymous report can limit an institution’s ability to respond to alleged behavior, however collecting the data is critically important,” she said.

Vitchers said that online, anonymous reporting systems are considered an “evidence-based best practice” since members of Generation Z – those born roughly between 1997 and 2010 — are much more likely to seek help and information online.

Victims typically take about 11 months to identify themselves as the victim of a sexual assault to a schools’ Title IX office, Vitchers said.

Some schools found that their online systems were getting anonymous reports in as little as three months after the assault, Vitchers said. Meanwhile, faster reporting, even if anonymous, has value for college and university administrators, Vitchers said.

“This at least allows schools to get a snapshot of the prevalence of sexual assault that’s happening on campus in a way that gives them a better understanding of what’s happening in their campus community,” Vitchers said. “Because you can’t solve a problem if you don’t know the scope of it.”

The system could, for instance, tell university administrators if sexual assault is more prevalent during a certain time of year or at certain spot on campus. That gives them the opportunity to take a targeted action, Vitchers said.