Gov. Tom Wolf signed a $34 billion compromise budget Friday after lawmakers wrapped up the week with a flurry of votes on hundreds of pages of legislation that in some cases drew angry protests from his fellow

HARRISBURG – Gov. Tom Wolf signed a $34 billion compromise budget Friday after lawmakers wrapped up the week with a flurry of votes on hundreds of pages of legislation that in some cases drew angry protests from his fellow Democrats.

Fueled by strong tax collections, the budget boosts aid to public schools and universities, holds the line on taxes, and stuffs a substantial sum into reserves.

Both Wolf and top Republicans in the GOP-controlled Legislature said they were proud of the budget.

However, Wolf saw some of his top priorities blocked by Republicans, and he gave into a Republican demand to end a decades-old cash assistance program for the destitute deemed temporarily unable to work.

Not a single Democratic lawmaker voted for the bill, which ends the program called “general assistance,” and debate over it in the Senate turned ugly Wednesday. Meanwhile, 62 of the 70 votes against the main spending bill were from Wolf’s fellow Democrats, some of whom criticized the budget as lacking courage.

More: House back to work on budget, morning after ed bill meltdown

“In divided government, you have to advocate aggressively, you have to negotiate hard, and you also have to do what’s best for all of the people you serve,” Wolf said in a statement Friday announcing he would sign the budget bills. “You have to do everything you can to promote the most forward-looking agenda you can conceive, and to prevent regressive policies from becoming law.”

House Speaker Mike Turzai, R-Allegheny, walks down a corridor at the state Capitol in Harrisburg, Pa., Friday, June 28, 2019. The final pieces in the legislative puzzle that makes up a $34 billion compromise state budget package were on their way Friday to Democratic Gov. Tom Wolf after the Pennsylvania House wrapped up work with a flurry of votes. (AP Photo/Matt Rourke) (Photo: Matt Rourke / AP)

In interviews Friday, Wolf said he understood Democrats’ frustration that the budget didn’t go far enough, but he defended it as “making lives better” and said the state is far ahead of where it was when he took office in 2015.

“We’re a much more progressive state than we were five years ago, and I’m very proud of that,” Wolf said. “At the same time, there’s still a lot of work to be done.”

Both chambers gaveled out until September after approving the final budget-related bills.

Lawmakers passed a separate measure to help counties afford new voting machines that have an auditable paper trail ahead of the 2020 presidential election, although Democratic lawmakers protested some of the bill’s provisions changing election laws.

All told, the 2019-20 spending plan, for the budget year that starts Monday, authorizes new spending of nearly $2 billion, or about 6% more than the current fiscal year’s approved spending.

Much of the extra spending covers new discretionary aid for public schools, plus extra amounts to meet rising costs for prisons, debt, pension obligations and health care for the poor. 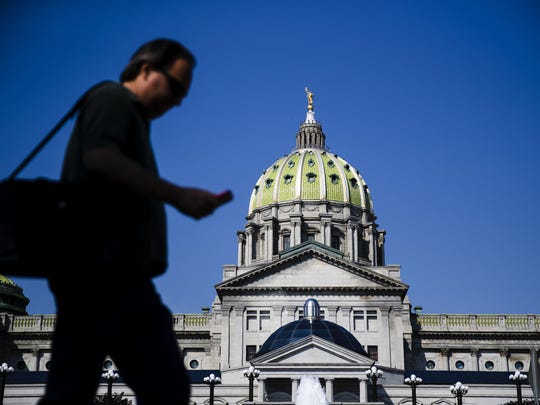 A pedestrian walks by the state Capitol in Harrisburg, Pa., Friday, June 28, 2019. The Pennsylvania House is working to wrap up final budget-season votes two days until the fiscal-year deadline, the morning after grinding to a halt over a critical education bill. (AP Photo/Matt Rourke) (Photo: Matt Rourke / AP)

It sends $210 million more to public school operations and instruction, as well as tens of millions more to pre-kindergarten programs and higher education institutions. It is also expected to leave nearly $300 million for the state’s “rainy day” budgetary reserve.

Much of it was similar to the $34.1 billion proposal Wolf issued in February. Healthy revenues eased pressure on lawmakers and the governor, helping them deliver an on-time budget after protracted battles during Wolf’s first three years in office.

Still, Republicans rejected a push by Wolf and his Democratic allies to raise Pennsylvania’s minimum wage, as well as a new fee proposed by the governor on municipalities that rely solely on state troopers for local police services.

For the fifth straight year under Wolf, Republicans again blocked a tax on Marcellus Shale natural gas drilling he had sought this year to underwrite infrastructure and development projects.

The Legislature authorized borrowing $90 million to pay for voting machines, to help counties with a tab expected to exceed $100 million. The borrowing provision emerged at the 11th hour, after weeks of Republicans saying they did not support Wolf’s demand that counties buy new machines.

On Wednesday night, Republicans abruptly bundled the borrowing provision into a measure carrying changes to voting laws that Democrats opposed.

Wolf on Friday would not say whether he would sign or veto it but said there are elements of it that he doesn’t like and suggested that it didn’t go nearly far enough in improving access to voting.

Asked about that strategy, House Majority Leader Bryan Cutler, R-Lancaster, said it is the reality of divided government.

“I won’t discuss the private conversations I had with any of the parties, but the truth is we were trying to reach a compromise as much as possible,” Cutler said.

Wolf said he had no choice but to sign the bill eliminating general assistance but added that he is working on a way to help the thousands of people it was projected to serve.