Two western Pennsylvania health care giants have a deal that averts the looming breakup of their business relationship, an agreement that prevents disruption and higher costs for many patients.

FILE - In this Aug. 14, 2018, file photo, Pennsylvania Attorney General Josh Shapiro walks to the podium to speak about a grand jury's report on clergy abuse in the Roman Catholic Church during a news conference at the Capitol in Harrisburg. Over the past four months, Roman Catholic dioceses across the U.S. have released the names of more than 1,000 priests and others accused of sexually abusing children in an unprecedented public reckoning spurred at least in part by a shocking grand jury investigation in Pennsylvania, an Associated Press review has found. (AP Photo/Matt Rourke, File) (Photo: Matt Rourke / AP)

HARRISBURG — Western Pennsylvania health care behemoths UPMC and Highmark struck a deal announced Monday that averts the looming breakup of their business relationship and prevents disruption and higher costs for some patients.

The contract will extend Highmark insurance customers' in-network access to UPMC doctors and hospitals for another decade, access that had been scheduled to expire Sunday with the end of a five-year, state-brokered consent decree.

Attorney General Josh Shapiro, a Democrat who earlier this month lost a court decision in his effort to extend the companies' relationship, called the agreement a good deal for patients and the public.

"When you're sick, every day matters," Shapiro said at a news conference in Pittsburgh. "Today, millions of Pennsylvanians and their families can rest easy because they don't have to worry about their health care changing after June 30."

UPMC had opposed renewing their agreement in 2012 after Highmark purchased what is now Allegheny Health Network and became what UPMC viewed as a competitor in providing health services and insurance coverage. Difficult talks that followed eventually produced a five-year consent decree that was set to expire on Sunday.

UPMC noted in a statement posted online that the new contract covers all of western Pennsylvania. UPMC described the agreement as "built on a foundation of trust, compromise and collaboration."

"Consumers and patients have two outstanding health systems, in addition to our many independent community hospitals, to choose from for their care," Holmberg said in a statement. "This announcement brings the certainty of health care access to thousands of people in our community." 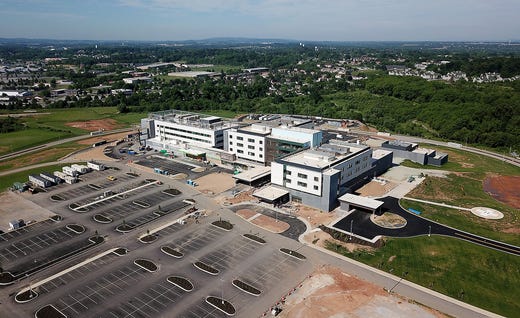 Construction at the new UPMC Memorial Hospital in West Manchester Township is on track for the projected August opening. Thursday, May 29, 2019 John A. Pavoncello photo The York Dispatch
Fullscreen

Holmberg said terms and conditions will be finalized in the coming weeks.

Shapiro said "intense dialogue over the past week" with Holmberg and UPMC chief executive Jeffrey Romoff eventually produced the deal.

The attorney general said the two companies agreed "they will no longer act as adversaries but instead work as allies, and we will be better off for it — patients, the region and the commonwealth."

The fate of Highmark's insurance customers in western Pennsylvania looked bleak on June 14, when a Commonwealth Court judge said the consent decree could not be extended through litigation past its expiration date.

Shapiro said his lawsuit will be withdrawn, but his office plans monitor UPMC and similar organizations for compliance with state law governing charities. Shapiro's lawsuit, filed in February, claimed UPMC had not been living up to its obligations as a public charity, status that protects it from taxes.

The lawsuit accused UPMC of wasting charitable assets through "exorbitant executive salaries and perquisites in the form of corporate jets and prestigious office space waste."