Trump and Biden, potential 2020 rivals, both head to Pennsylvania, a key battleground

President Donald Trump and Joe Biden have twin obsessions: with each other and with the state of Pennsylvania.

Trump and Biden, potential 2020 rivals, both head to Pennsylvania, a key battleground

WASHINGTON – President Donald Trump and Joe Biden have twin obsessions: with each other and with the state of Pennsylvania.

Like iron filings to a magnet, both will be drawn in the coming days to Pennsylvania, which was key to Trump’s victory in 2016 and would be central to almost any scenario for a Democratic victory in the 2020 presidential campaign.

Their trips – Biden on Saturday, Trump on Monday – elevate an emerging rivalry that has them locked in a wrestler’s grip long before Democrats even choose a nominee.

Trump, fearing Biden poses the most serious threat in industrial states like Pennsylvania, is trying to diminish him with a barrage of tweets and derisive comments. Biden welcomes the attention and sees it as validating his central argument to Democratic voters: that he’s candidate best equipped to beat Trump.

Together they are paying little attention to the 22 other Democrats running for the party’s presidential nomination, acting as if the starting gun has already been fired on the general election.

Their Pennsylvania itineraries are emblematic of their competing political strategies. Trump, aiming to energize the white working-class voters who brought him to victory, plans to hold a rally in rural Lycoming County in the central part of the state, which went for Trump by nearly 45 percentage points in 2016.

Biden, hoping to make up for his party’s 2016 shortfall among black and working-class voters, will hold his first large-scale 2020 campaign rally in Philadelphia, a bastion of black Democratic strength. Biden’s first campaign event was a union-heavy affair in Pittsburgh three weeks ago, when he threw down the glove before the president.

More: Biden opens with pitch to labor in battleground Pennsylvania

Trump’s visit, during which he is slated to campaign for a GOP candidate in a special election who looks to be a shoo-in, comes at a perilous time politically. Public surveys show Biden leading the president in this crucial battleground. The latest Quinnipiac University poll in Pennsylvania found Biden out-polls Trump 53% to 42%, with especially wide margins among independent voters and women.

The Trump team’s own polling shows him trailing in the state.

That’s a far cry from his stunning 2016 victory in Pennsylvania, which, along with narrow wins in Wisconsin and Michigan, demolished Democrats’ “blue wall” of support across the industrial heartland. Not since 1988 had a Republican presidential nominee carried Pennsylvania or Michigan. Wisconsin hadn’t voted for a Republican nominee since 1984.

But Trump’s margin of victory in Pennsylvania was only about 44,000 votes out of about 6 million cast.

This photo shows the skyline in Philadelphia along the Schuylkill River, Thursday, May 16, 2019. Former Vice President Joe Biden is choosing Philadelphia to base his 2020 presidential campaign, opting for his native Pennsylvania over the state of Delaware that sent him to the Senate for 36 years. (AP Photo/Matt Rourke) (Photo: Matt Rourke / AP)

Ever since that upset, warning signs for the GOP have been flashing in Pennsylvania. In special elections in 2017, Democrats flipped some long-held GOP local offices, and Democrat Conor Lamb, a centrist, won a House seat in the heart of Trump country. The 2018 midterm election was a statewide blowout as Democrats won both the U.S. Senate and gubernatorial races by double-digit margins.

Moving to get a grip on the situation, the Trump political team a few weeks ago traveled to Harrisburg, Pa., for a meeting with Republican National Committee and state GOP officials to address concerns over party infrastructure, organizational readiness and their string of losses, according to two officials with knowledge of the meeting.

The Trump campaign officials – including David Urban, who oversaw Trump’s 2016 operation in Pennsylvania, and Trump 2020 political directors Bill Stepien and Chris Carr – “came to make it clear that they’ll be running the show,” one attendee said.

Trump’s hope for holding onto the state depends heavily on galvanizing Trump voters who may not have turned out in 2018.

“Democrats are excited about what’s been happening here, but you have a very different electorate in a presidential year than in off years,” said Charlie Gerow, a GOP consultant in Harrisburg.

Urban, who will serve as an informal adviser to Trump in 2020, has tried to keep the president’s focus on positive economic news. 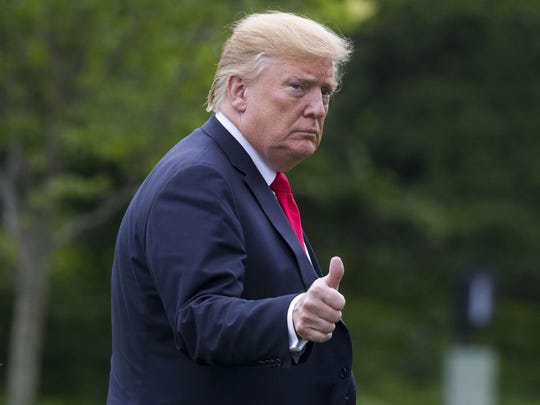 President Donald Trump gives thumbs up after arriving on Marine One on the South Lawn of the White House, Friday, May 17, 2019, in Washington. Trump is returning from a trip to New York. (AP Photo/Alex Brandon) (Photo: Alex Brandon / AP)

“If the question is always ‘are you better off than you were four years ago?’ people in Pennsylvania will say ‘Yeah, we are better off,’ and there are numbers that point to that,” Urban said.

Pennsylvania’s unemployment rate in March dropped to 3.9% – the lowest since 1976. The Quinnipiac poll found that 54% believe they are financially better off today than they were in 2016. But that does not necessarily translate into political victory as indicated by the numbers in the same poll showing Trump trailing Biden.

“Even in smaller communities, you are starting to see pickup in job growth and wages, but this is trying to overcome a 40-year slide,” Morrison said. “A Democrat is not going to win those voters by saying, ‘See, that guy failed.’”

Biden’s approach so far has been to promise in general terms to lift up the middle class and to appeal to people who are not benefiting from recent economic growth and Trump-era tax breaks.

“The stock market is roaring, but you don’t feel it,” Biden said in Pittsburgh. “There’s a $2-trillion tax cut last year. Did you feel it? Did you get anything from it? Of course not. Of course not. All of it went to folks at the top and corporations that pay no taxes.”

Biden’s Pennsylvania launch also sends a message to Democratic primary voters: As a Scranton-born centrist, he brings unique strengths to beating Trump in Pennsylvania and across the industrial belt.

“When you look at Pennsylvania, Wisconsin and Michigan, these are the constituencies that Joe Biden has fought for his entire life,” said John Anzalone, a Democratic pollster who advises Biden.

Philadelphia, where Biden is basing his campaign headquarters and is holding his kickoff rally, is particularly important to Democrats if they are to make up for the failings of Clinton’s 2016 campaign. Although Clinton won the city and surrounding suburban counties, the margins were not as big as she needed to overcome the massive increase in rural turnout that carried Trump to victory. African American turnout in Philadelphia fell. Biden hopes his ties with the black community will allow him to change that in 2020.

Biden’s Democratic rivals don’t buy his argument that he has a unique lock on places like Pennsylvania. The Quinnipiac poll showed that, in hypothetical matchups, Sens. Bernie Sanders of Vermont and Elizabeth Warren of Massachusetts also out-polled Trump, although Biden did so by the widest margin.

But Republicans concede that Biden will be a much more formidable opponent than Clinton in 2016.

“He was raised in northeast Pennsylvania, spent a large part of his political career in southeast Pennsylvania and fancies himself as a candidate who can garner a lot of blue-collar support from the building trades – all of those are areas that were nontraditional supporters of the Trump campaign last time,” said Mike Devanney, a GOP consultant in Pittsburgh.

But with months to go until the first primary contests, Republicans are hopeful that Biden, should he survive the primary, will emerge seriously bruised and pushed far to the left.

“He’s obviously a formidable candidate, but he hasn’t even been attacked yet,” Devanney said. “His numbers have only one way to go, and that’s down.”