Biden opens with pitch to labor in battleground Pennsylvania

By picking Pennsylvania for his first campaign speech of the presidential race, Joe Biden is signaling he hopes to own what may be the 2020 election’s toughest battleground.

Biden opens with pitch to labor in battleground Pennsylvania 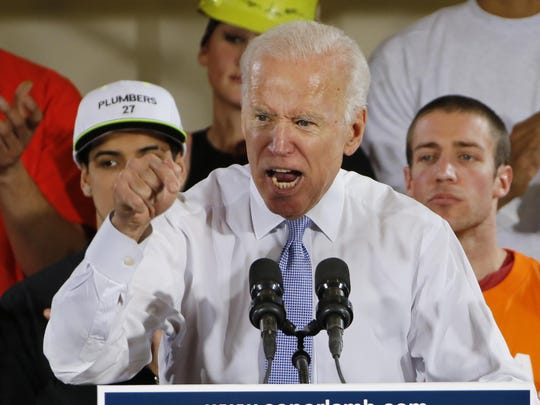 FILE- In this March 6, 2018 file photo, former Vice President Joe Biden speaks at a rally in Collier, Pa. Biden is picking Pennsylvania for the site of his first stump speech of the presidential campaign, sending a clear signal that he intends to own what may be the raceâs hardest-fought battleground of 2020. (AP Photo/Gene J. Puskar, File) (Photo: Gene J. Puskar / AP)

HARRISBURG – By picking Pennsylvania for his first campaign speech of the presidential race, Joe Biden is signaling he hopes to own what may be the 2020 election’s toughest battleground.

Planting a flag in Pennsylvania makes sense for the longtime former senator from Delaware: He was born in Pennsylvania, has numerous ties to it and is using his deep inroads with influential state party figures to his advantage in the primary.

For Democrats it’s a late primary state that may have little value in the nomination. But Donald Trump’s campaign is already mapping out a strategy to win Pennsylvania a second time, and the Republican won’t easily cede a state that forms the core of his likeliest path back to 270 electoral votes.

“It is early in the game, but I just think this imperative in 2020 is such that we have to start early,” said Pennsylvania’s Democratic Sen. Bob Casey, who is endorsing the former vice president. Pennsylvania is “so big and it’s so consequential that it’s going to take time to make the case here.”

Biden’s planned speech to an organized labor crowd Monday in Pittsburgh comes days after he announced his candidacy and promptly went to a fundraiser in Philadelphia organized by the area’s prominent Democrats.

In Pittsburgh, he’ll speak about rebuilding the middle class after receiving the endorsement of the International Association of Fire Fighters.

“He’s one of the staunchest advocates for working families,” the union’s general president, Harold Schaitberger, said in a video endorsement Monday. “He knows that a strong middle class means a strong America.”

Trump disparaged both Biden and the endorsement in tweets claiming support from rank-and-file union members.

“The Dues Sucking firefighters leadership will always support Democrats, even though the membership wants me. Some things never change!” Trump tweeted. Trump added, “I’m only here because of Biden & Obama. They didn’t do the job and now you have Trump, who is getting it done - big time!”

No other primary candidate is from Pennsylvania, and it will be the last of the delegate-rich states to vote, except perhaps for New Jersey. It’s received limited attention from Biden’s rivals.

Among those who have come, former Texas Rep. Beto O’Rourke and Vermont Sen. Bernie Sanders each held a well-attended rally in recent weeks, and Sanders made the case for why he can beat Trump in Pennsylvania.

Several others have nibbled around the edges, attending private fundraisers in Philadelphia or doing a low-key meet-and-greet. Sen. Kamala Harris of California and Sen. Elizabeth Warren of Massachusetts, like Biden, campaigned last year for Casey.

But in the general election, Pennsylvania is tied with Illinois for the nation’s fifth-biggest Electoral College prize. And the “blue wall” states of Pennsylvania, Wisconsin and Michigan that unexpectedly tipped to Trump over Democrat Hillary Clinton in the 2016 election may have supplanted Florida and Ohio as the nation’s premier presidential battlegrounds.

Undoubtedly on their minds is an avalanche of losses, both statewide and in the suburbs of Pittsburgh and Philadelphia, since 2016. Their meeting Wednesday emphasized unity, and national officials encouraged the state Republican Party to step up its field and fundraising operation, according to a person familiar with the meeting who spoke on condition of anonymity to describe it. Republicans said the Trump campaign and the Republican National Committee would soon have similar meetings with other target states.

For Democrats, Pennsylvania is an outsized electoral prize: Harry S. Truman in 1948 was the last Democratic presidential candidate to lose Pennsylvania but win the election, and Trump’s victory in the state was a shock to their system.

Trump became the first Republican presidential nominee to win Pennsylvania since 1988, even though he didn’t necessarily need Pennsylvania to secure the White House. In any case, Republicans have proved repeatedly they can win the presidency without Pennsylvania, as George W. Bush did twice.

“Clearly Pennsylvania is in the top tier of states that we want to win,” said the state’s Republican Party chairman, Val DiGiorgio. Trump took the state by less than 1 percentage point, and this time some Republicans are pushing for him to make a strong pitch to Philadelphia and its suburbs, where voters rejected Trump in huge numbers and have since rejected Republicans in historic fashion. “The question is, how do we get suburban voters back into the fold?” DiGiorgio said.

Biden’s supporters see in him a candidate who can stanch the massive losses in the rest of Pennsylvania that delivered victory to Trump and flipped some traditionally Democratic counties far from Pittsburgh and Philadelphia.

Biden begins with some advantages, at least among Democrats.

He is backed by influential Philadelphia Democrats who nicknamed him “Pennsylvania’s third senator” when they routinely went to him for help that they might not get from the state’s two Republican senators.

“He was our senator, we adopted him,” quipped Bob Brady, Philadelphia’s longtime Democratic Party chairman.

Biden routinely reminds audiences that he was born in northeastern Pennsylvania and spent his boyhood there, a normally Democratic-leaning area where Trump performed particularly well.

In Pittsburgh on Monday, Biden is returning to a city where he has come to be a regular in the Labor Day parade.

“On a national level, nobody has made more visits here than Joe Biden,” said Darrin Kelly, president of the Pittsburgh-area branch of the AFL-CIO. “Nobody has called Pittsburgh home more than him.”