The college basketball bribery trial has spilled over into football, and Penn State has been implicated. 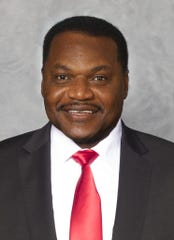 Penn State was implicated on Tuesday when college basketball’s bribery case crossed into the football world.

Blazer didn’t specify names of players or coaches involved — but former Penn State star Aaron Maybin was clearly implicated as one of those players, according to reporters present at the federal court trial.

Blazer testified that in 2008-09, he had an NFL client whose father was also an assistant at Penn State. Former defensive line coach Larry Johnson Sr. is the only Nittany Lion staffer at the time that fits that description, Yahoo! Sports’ Dan Wetzel reported.

Blazer said the unnamed assistant coach set up a meeting in State College between the assistant, Blazer and the father of the unnamed Penn State player, who was considering leaving early for the NFL draft. Blazer testified that at the meeting, the assistant asked him to provide $10,000 to the player’s father to, as Wetzel wrote, “take some financial stress out of the decision.” Blazer did it, the player turned pro anyway, was drafted 11th overall and the father returned the $10,000.

Maybin left early and was drafted 11th overall in the 2009 NFL draft by the Buffalo Bills.

“That is not accurate at all,” Johnson told Yahoo! Sports. “That is absolutely false. I would never, ever ask anybody to do that. That is not me.”

Johnson Sr. also told Yahoo! Sports that he had no direct business ties with Blazer despite the financial planner representing his son, Larry Johnson Jr., while in the NFL.

Wetzel reported that it is “highly unlikely to attract NCAA attention” to either Penn State or Ohio State, where Johnson Sr. works now.

When reached for comment, a Penn State spokesperson released this statement: “Penn State has just been made aware of this concerning allegation. The University will thoroughly examine this matter. Until we know more, we can’t comment further.”

Blazer previously pleaded guilty to multiple counts of fraud. He faces 67 years in prison and is cooperating with the government’s investigation into college basketball bribery and recruiting practices.