Pennsylvania’s elected auditor said Friday that officials in 18 of the state’s 67 counties reported accepting gifts, meals or trips from firms competing to sell or lease new voting machines ahead of the 2020 el

York County officials accepted bagels, coffee and meals from firms competing to sell or lease voting machines before the 2020 elections, according to a report released by Auditor General Eugene DePasquale on Friday, Feb. 22.

York County is one of 18 of the state's 67 counties that reportedly accepted gifts, based on the audit.

York County Voting and Elections Office workers accepted bagels and coffee at a morning meeting, and two members accepted a paid lunch on another occasion, the audit states.

There will be no changes to county policy, Walters said.

DePasquale said Friday accepting the gifts is wrong, even though it’s a legal practice and officials may have taken no action in return.

“Anyone who took them, period, could be swayed by the perks,” he said. Public officials, he said, should not “accept this nonsense.”

The gifts included expense-paid travel to destinations including Las Vegas, tickets to a wine festival and private distillery tour, dinners at high-end restaurants, tickets to an amusement park and an open bar at a conference for election officials, DePasquale said. A promotional folding chair, doughnuts and candy were among other gifts.

“I want counties to make their decisions based on the best interests of voters and not on any other factors,” DePasquale, a Democrat, said at a news conference announcing the findings.

DePasquale said the free food and drink ranged from lobster dinners to cups of coffee and that the free entertainment was not reasonably linked to the question of which machines would be best.

“I don’t know what a wine tour has to do with the quality of a voting system,” he said.

The survey covered the past five years. DePasquale said most of the gift and travel recipients were county elections officials and a few were county commissioners. 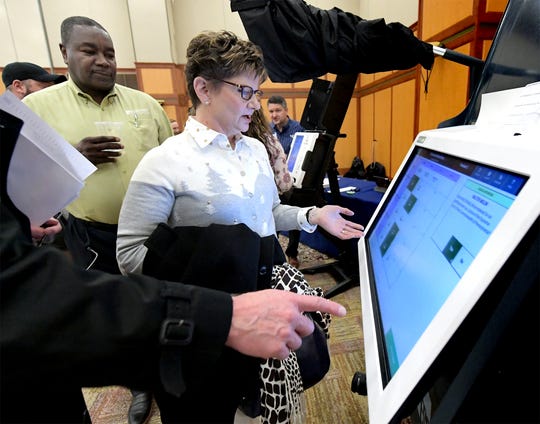 Paula Sembach of Dauphin County is advised by Willie Wesley, Jr, director of business development for Election Systems and Software, while sampling a voting machine with her husband Fred, who is chief of staff to State Senator Mike Folmer Wednesday, Dec. 12, 2018. They were attending the New Voting Systems Expo hosted by the Pennsylvania Department of State at Dickinson College. Pennsylvania counties are preparing to replace voting machinesÂ afterÂ Gov. Tom Wolf in April mandatedÂ that voting machines used in the state have a verifiable paper trail. Bill Kalina photo (Photo: Bill Kalina, The York Dispatch)

More: York County has year to replace voting machines — and figure out how to pay up to $8 million

The total cost of buying new machines across Pennsylvania is expected to be more than $125 million.

Doug Hill, executive director of the County Commissioners Association of Pennsylvania, said election officials sometimes have contacts with vendors for reasons that are not related to selling them equipment, such as helping to test or evaluate new products.

He said one county had new machines in place last November. Three or four may be using them by the May primary, and about half of counties hope theirs will be ready in November, Hill said.

“The bottom line is, we’re being as diligent as possible in a high-pressure situation to get something in place that is going to work well for the voters, that is going to be easy for the officials to administer, and is going to guarantee the safety and accuracy of casting a ballot,” Hill said.

Wolf has imposed a gift ban on the executive branch under his jurisdiction, but such rules do not necessarily apply to counties.

Hill was unsure if any counties have outright gift bans in place but said many do supplement the Ethics Act’s reporting requirements with more stringent rules.

DePasquale said he has reason to think that at least some recipients may not have disclosed gifts as required, and he is referring those matters to the State Ethics Commission for review.

Editor's note: This story has been corrected. An earlier version incorrectly said that vendors reimbursed York County officials for travel.