Democratic Gov. Tom Wolf reported about $414,000 in adjusted gross income in 2017 and nearly $1.3 million in charitable donations in a federal tax return that his campaign made available for review by The Assoc 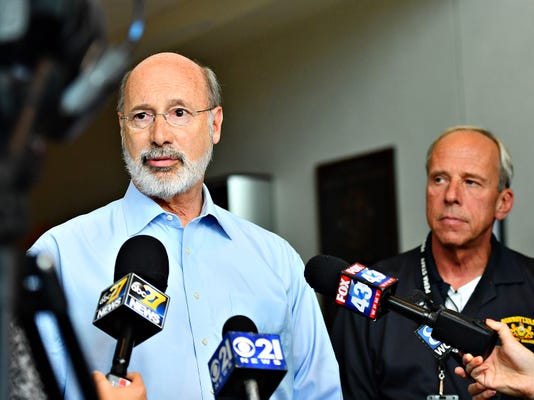 HARRISBURG – Democratic Gov. Tom Wolf reported about $414,000 in adjusted gross income in 2017 and nearly $1.3 million in charitable donations in a federal tax return that his campaign made available for review by The Associated Press on Friday.

Wolf made the two-page 1040 form public and allowed a reporter to review the rest of his 102-page federal tax return in a campaign office, following rules he set in 2014 when he was running for a first term.

Candidates for governor of Pennsylvania have long made all or part of their tax returns public, going back at least to Republican Dick Thornburgh in 1978, who went on to serve two terms in office. Republican gubernatorial nominee Scott Wagner, a former state senator who has made millions in waste-hauling, has declined to release his tax return.

Wolf, 69, is seeking a second four-year term in the Nov. 6 general election.

Wolf’s income has dropped to about one-third of what it was in 2014, when he still ran and owned a large stake in his family’s home and building products distributorship. That year, he reported $1.3 million in adjusted gross income. Before he was inaugurated, he put most of his investments in a blind trust and soon after shed his stake in the Wolf Organization.

He reported $266,000 in cash gifts to charity – which includes his salary, according to records provided by Wolf’s campaign Friday – and another $1 million in securities donated to Franklin and Marshall College in Lancaster, where his wife Frances is a trustee. The federal government caps deductions for charitable gifts at 50 percent of adjusted gross income in 2017.

Wolf’s deductions of nearly $310,000 included charitable gifts, fees to accountants and investment managers, and state and real estate taxes. After deductions, he’ll owe $8,000 in federal taxes on $103,000 in taxable income.