A Pennsylvania appeals court said Wednesday it would not reconsider its recent decision throwing out some of the most serious criminal charges against three former Penn State administrators related to their handling of the Jerry Sandusky child molestation scandal. 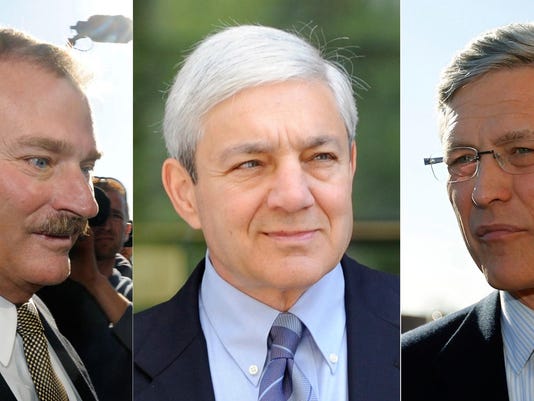 HARRISBURG — A Pennsylvania appeals court said Wednesday it would not reconsider its recent decision throwing out some of the most serious criminal charges against three former Penn State administrators related to their handling of the Jerry Sandusky child molestation scandal.

Superior Court posted an order denying the attorney general’s office’s petition for re-argument in the case of former university president Graham Spanier, former vice president Gary Schultz and former athletic director Tim Curley. Lawyers for all three men declined comment, and a spokesman for the prosecutors said the decision was under review.

The attorney general’s office could seek an appeal to the state Supreme Court, or press forward for trial on the remaining counts in county court in Harrisburg.

The order was not publicly available because the entire appellate case file is sealed, the clerk’s office said.

A three-judge panel in January threw out charges of perjury, obstruction and conspiracy, but left in place charges of failure to report suspected child abuse and endangering the welfare of children, and a perjury count against Curley.

The central issue in the appeal, and a main reason why charges first filed in 2011 and 2012 have not gone to trial, has been the role played during grand jury proceedings by Penn State’s then-general counsel, Cynthia Baldwin.

The January ruling said that Baldwin’s own grand jury testimony was a violation of attorney-client privilege and that she did not adequately explain she was representing them as university employees and not working to protect their individual interests. The decision overturned a county judge’s ruling that said Baldwin’s actions were proper, clearing the way for trial.

Curley, Schultz and Spanier testified in early 2011 to a grand jury about the response to complaints regarding Sandusky while they were serving in high-ranking positions at the university.

Sandusky, the school’s defensive football coach for decades under Joe Paterno, was convicted in 2012 of 45 counts of child sexual abuse and is appealing while serving a 30- to 60-year state prison sentence.