A North York borough councilman is accused of saying a homophobic slur toward a candidate he was running against in this year's election. 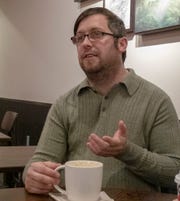 A North York borough councilman denies spouting a homophobic slur at a candidate who unsuccessfully challenged him in this year's election.

Then-candidate Jason Querry claims Bill Jackson, vice president of the borough council, called him a "f—t" outside the North York Borough Hall on May 21 when the two met for the first time.

"He put his finger in my face and said, 'Just so you know, there's no way in hell that a f—t will ever take this seat,'" said Querry, who failed earlier this month to secure a seat on the borough council.

At the council's meeting Nov. 12, more than 50 people packed the borough hall room to support Querry. Residents in attendance called for Jackson's resignation, which he rebuffed.

"Those statements are false, I did not make any homophobic statements," Jackson told The York Dispatch on Monday. "I am not prejudice against any member of the LGBT community."

While campaigning in August, three doors were slammed in Querry's face from people who also stated similar rhetoric to what he claims Jackson said, Querry said.

Querry added that Jackson and Richard Shank, the president of the borough council, had recently canvassed that same neighborhood.

Querry said he reached out to officials with the York County Democratic Party, who initially decided to hold off on taking the incident public.

But, as of Monday, county Democrats had joined the chorus calling for Jackson's resignation.

"Bill Jackson needs to not be on this council anymore," said Salomé Garcia-Johnson, an official with the county and state Democratic parties. "He portrays racist, bigoted dogma."

Though Jackson denied the allegations, he apologized.

"Jason, if I did anything to you, I apologize for that," Jackson said at the Oct. 12 meeting. "I thought you were a friend."

Jackson told The York Dispatch he has "no idea" why Querry made this accusation against him.

Several witnesses, including Mary Somerville and Sandra Hinkle told The York Dispatch they heard and saw Jackson making homophobic comments to Querry back in May.

Somerville is a friend of Querry's who said she was standing next to him when the comment was allegedly made.

Hinkle, a former member of the borough council, said she had never met Querry prior to the incident. She said Jackson wagged his finger and she heard him say "f----t."

Querry said acquaintances and friends of his filed multiple complaints to the State Ethics Commission. Querry himself filed a complaint with the Pennsylvania Human Relations Commission.

Querry was not voted into North York Borough Council in November.

"I'd like to thank everybody for coming in tonight and talking about these things," Shank said. "We will be in discussion with council on how we're going to proceed with this."

Another protest is planned  for the next borough council meeting on Tuesday, Dec. 10.