Pence to make fourth visit to Pennsylvania this year

Vice President Mike Pence is making another trip to the presidential battleground state of Pennsylvania this year, this time in a campaign swing.

Pence to make fourth visit to Pennsylvania this year 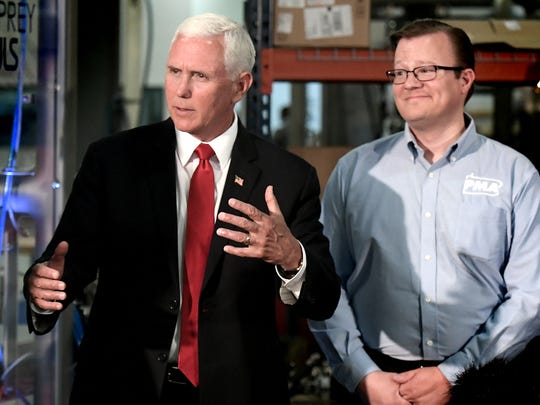 HARRISBURG – Vice President Mike Pence is making another trip to the presidential battleground state of Pennsylvania this year, this time in a campaign swing.

Pence will appear Tuesday in Rochester, near Pittsburgh, to speak to a Veterans for Trump group before joining the president later in the day at a campaign rally at the Giant Center in Hershey.

Pence has already made three trips to Pennsylvania this year to visit manufacturers and make the case for Congress to pass the Trump administration’s rewrite of a trade pact with Canada and Mexico.

Pennsylvania is important to Trump’s re-election campaign next year, a state where he scored a surprise win in 2016’s election to become the first Republican presidential nominee to win its electoral votes since George H.W. Bush in 1988.

Pennsylvania is one of several battleground states that could determine the outcome of the 2020 election because their electorates are so evenly divided.

Trump’s success in breaking the Democrats’ so-called blue wall in Michigan, Wisconsin and Pennsylvania was key to him winning the White House.