President Donald Trump’s attack on the Federal Reserve spooked financial markets on Christmas Eve, raising fears about an uncertain future should the White House try to undermine or remove the head of the U.S. 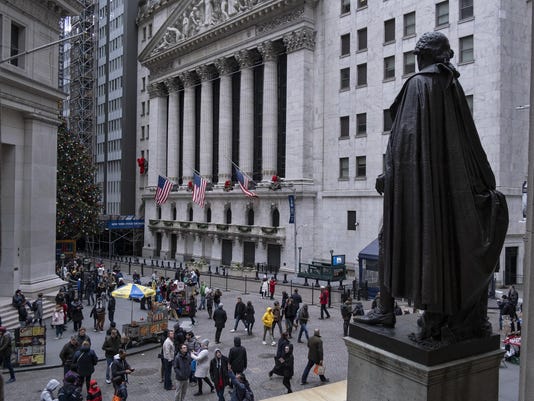 People stand near a statue of George Washington, adjacent to the New York Stock Exchange, background, Saturday, Dec. 22, 2018, at the closed Federal Hall National Memorial in New York. Now in its 10th year, America's economic expansion still looks sturdy. Yet the partial shutdown of the government that began Saturday has added another threat to a growing list of risks. (AP Photo/Craig Ruttle)(Photo: Craig Ruttle / AP)

President Donald Trump’s attacks on the Federal Reserve spooked the stock market on Christmas Eve, and efforts by his Treasury secretary to calm investors’ fears only seemed to make matters worse, contributing to another day of heavy losses on Wall Street.

The major stock indexes fell more than 2 percent Monday, nudging the market closer to its worst year since 2008. Stocks are also on track for their worst December since 1931, during the depths of the Great Depression.

The market has been roiled for most of the month over concerns about a slowing global economy, the escalating trade dispute with China and another interest rate increase by the Federal Reserve.

The past two trading days, however, have been dominated by something else: major losses following tweets from the president criticizing Fed Chairman Jerome Powell and the central bank.

Trump’s Monday morning tweet heightened fears about the economy being destabilized by a president who wants control over the Fed.

“The only problem our economy has is the Fed,” the president tweeted. “They don’t have a feel for the Market, they don’t understand necessary Trade Wars or Strong Dollars or even Democrat Shutdowns over Borders. The Fed is like a powerful golfer who can’t score because he has no touch – he can’t putt!”

More: Stock market woes raise a nagging fear: Is a recession near?

On Sunday, Treasury Secretary Steven Mnuchin made a round of calls to the heads of the nation’s six largest banks in an attempt to calm jitters, but the move only raised new concerns about the economy.

Most economists expect growth to slow in 2019, not slide into a full-blown recession. In fact, many economic barometers still look encouraging. Unemployment is at 3.7 percent, the lowest since 1969. Inflation is tame. Pay growth has picked up. Consumers boosted their spending this holiday season.

Fed board members are nominated by the president, but they’ve historically made decisions independent of the White House. Trump nominated Powell last year to become chairman.

But the president has voiced his anger over the Fed’s decision to raise its key short-term rate four times in 2018. Those measures are intended to prevent the economy from overheating.

Trump’s latest remarks only created more uncertainty for already unnerved investors who have seen all of this year’s stock market gains evaporate.

“Now we’re having a correction and we’re down for the year, so the narrative people get drawn to is that perhaps his more unpredictable policies are bad for the market,” said Craig Birk, chief investment officer at Personal Capital. “The separation between the president and the Fed, maybe just causes a little more concern than it would have a few months ago.”

Trading was choppy and volume was light Monday during a shortened trading session ahead of Christmas on Tuesday. U.S. markets will reopen on Wednesday.

Technology stocks, health care companies and banks took some of the heaviest losses in the sell-off.

Mnuchin said the heads of Bank of America, Citigroup, Goldman Sachs, JP Morgan Chase, Morgan Stanley and Wells Fargo all assured him they have ample money to finance their normal operations, even though there have been no serious liquidity concerns rattling the market.