Businesses out of compliance "will forfeit their ability to receive any applicable disaster relief and/or may be subject to other appropriate administrative action," the release states. 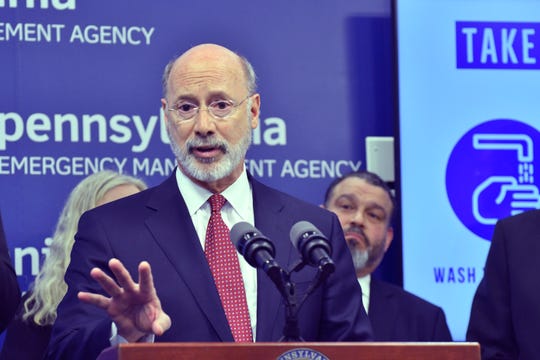 Gov. Tom Wolf of Pennsylvania speaks at a new conference at Pennsylvania Emergency Management Headquarters where he said he was ordering schools and other facilities to close in a suburban Philadelphia county, Montgomery County, that has been hard-hit by the COVID-19, Thursday, March 12, 2020 in Harrisburg, Pa. (AP Photo/Marc Levy) (Photo: Marc Levy, AP)

Gov. Tom Wolf has ordered all "non-life-sustaining" businesses in the state to close until further notice, vastly expanding his COVID-19 mitigation efforts.

All businesses within the category must close their "physical locations" by 8 p.m. Thursday. Enforcement actions against those that don't comply will begin Saturday, according to a state news release Thursday evening.

“To protect the health and safety of all Pennsylvanians, we need to take more aggressive mitigation actions,” Wolf said in the release.

More: Information on coronavirus and COVID-19 from the CDC

More: UPDATED: The latest closings and cancellations in York County

More: Which businesses are life-sustaining and which aren't

“This is unprecedented, and clearly the impact to our economy will be unprecedented, but so is the threat to our health and human safety,” said Kevin Schreiber, president and CEO of the York County Economic Alliance.

Schreiber said his organization is placing its trust in the government that this is the best way to protect the lives of Pennsylvanians.

But he also said he hopes policymakers and government officials recognize the sacrifice being made by businesses across the commonwealth and that legislators take “swift and decisive action” to support those people.

Bars and restaurants will still be able to offer delivery and takeout.

A full list of life-sustaining businesses can be found here.

Businesses not exempt could face significant penalties if they don't shutter their "physical locations," the release reads.

Businesses out of compliance with the new order "will forfeit their ability to receive any applicable disaster relief and/or may be subject to other appropriate administrative action," the governor's release states.

The state may also terminate state loan or grant funding for businesses that violate the order.

On Monday, Wolf ordered all restaurants and bars to cease dine-in operations, limiting them to takeout and delivery. He also "strongly urged" nonessential businesses, such as salons and gyms, to close but fell short of mandating sweeping closures.

Wolf does have the authority to close any business in the state as a part of the vast powers granted by the state's emergency management law, his administration has said.

Republicans, however, have disputed that assertion.

“As it stands now, the governor does not have the authority to shutter all business in the Commonwealth," said state Sen. Dave Arnold, R-Lebanon, earlier this week.

On Thursday, the state announced there are now 185 confirmed cases of COVID-19, two of which are in York County.

There has also been one reported adult death in Northampton County.

Even before Wolf's order on Thursday, mitigation efforts already shuttered some businesses statewide, including those vital to York County's economy.

For example, Harley-Davidson Inc.'s assembly plant in Springettsbury Township was one of three facilities operated by the motorcycle giant that has suspended operations until the end of the month.

A representative for the local chapter of the International Association of Machinists and Aerospace Workers, the union representing the York County Harley-Davidson employees, said 1,240 of its members would be temporarily out of work.

The closures will have a “tremendously significant economic impact,” said Gene Barr, president and CEO of the PA Chamber of Business and Industry.

Barr said the governor had to weigh the economic costs of shuttering businesses against the costs to health and human life that could result from further spread of the virus.

The PA Chamber has been fielding calls all week from concerned business owners, he said.

“The uncertainty is one of the worst parts,” Barr said. “No one knows how long this will go on.”