Stuck in traffic in York City this week? Here's why

Water main line replacement has left York City commuters queued in one lane on West Market Street recently, at times in standstill traffic. And there's still a week to go.

Stuck in traffic in York City this week? Here's why 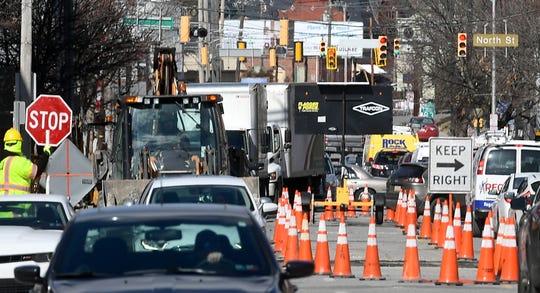 Recent work on water mains in York City has created a traffic nightmare downtown, causing lane closures on North George and West Market streets that are sending motorists on detours or stopping them in their tracks.

And there's still a week to go.

The York Water Co. has been replacing the city's entire main water line since July 2019. But more recent work at Continental Square has left intersections from Pershing Avenue to George Street congested.

"Every block needs to get done by spring," said Chaz Green, director of the city's public works department, adding that baseball season and a repaving project on the entirety of North George Street are approaching.

The work is common for the utility company, as it replaces about 50,000 feet of water main line annually. Aside from George Street, replacement work also is being done on Beaver Street.

JT Hand, chief operating officer at York Water Co., said the 100-year-old water main "has served its purpose, and it's time to replace it before it fails."

The new water line at North George Street will be in place by the end of next week, easing the West Market Street traffic, Hand said.

But transferring services to the new water line will begin promptly afterward, work that will likely begin at North George Street and Arch Street, affecting traffic in that area.

The work should be done by mid-April, according to York Water Co.