The York City Department of Fire/Rescue Services battled a blaze in downtown York Monday afternoon that caused an estimated $150,000 in damage. 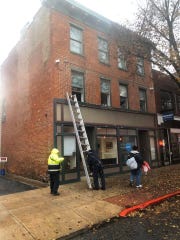 The York City Department of Fire/Rescue Services battled a blaze in downtown York Monday afternoon that caused an estimated $150,000 in damage.

Station 99-2 responded about 2:40 p.m. after receiving a report from an occupant the three-story building located at 280 W. Market St. was on fire, the department said.

According to the York City fire department's Facebook page, firefighters found smoke showing and made a quick interior attack. They were able to confine the fire to the second floor of the building.

The fire department, which vacated the scene about 4:15 p.m., reported that no one was injured.

The cause of the fire was a malfunction of the second-floor bathroom fan, the fire department said.