Mumps in York County Prison: No 'outbreak' yet, officials say

Four inmates have contracted mumps but are better now, the county spokesman said, and a fifth inmate is being tested for the highly contagious virus.

Mumps in York County Prison: No 'outbreak' yet, officials say 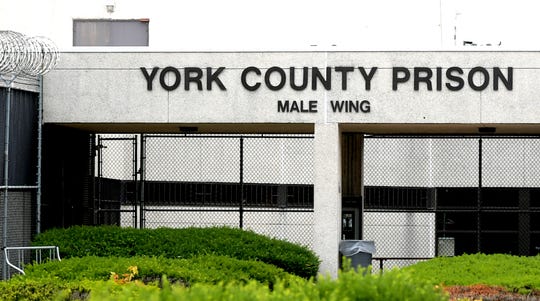 The cases of mumps inside York County Prison didn't yet constitute an outbreak, according to a state Department of Health spokeswoman on Thursday. But it was getting close.

Four York County Prison inmates who contracted mumps in the facility are now better, county spokesman Mark Walters said, adding that lab testing was underway to determine whether a fifth inmate had been sickened by the virus.

The state Department of Health is working with prison officials to investigate, according to Brittany Lauffer, spokeswoman for the health department.

She said there must be at least five cases of mumps in a facility such as a prison for the Department of Health to consider it an outbreak.

The mumps investigation in the prison began in early September, Lauffer said; the last confirmed case was from early October.

Inmates were vaccinated, she said, to protect from further exposures.

Immunization isn't effective for people who have already been exposed to the highly contagious virus, according to Lauffer.

Most fully recover: There is no cure for mumps — "you just deal with the course of the infection," she said.

PrimeCare Medical Inc., the Harrisburg-based company that contracts with the prison to provide medical services there, has offered to give vaccinations and booster shots to any staff member who requests it, according to Walters.

Corrections officers and other prison employees who want to be immunized can still go to their individual doctors' offices, and the cost of the shot is covered by the county's insurance carrier, Walters said on Thursday, Oct. 24.

PrimeCare also will be vaccinating all prison inmates, he said.

Lauffer said the Department of Health hasn't specifically identified how the infection made its way into York County Prison.

"That is something that is under investigation, and it's something we may never know," she said.

There were currently no other cases of mumps reported in hospitals, nursing homes, day care centers or other facilities in York County, Lauffer said. 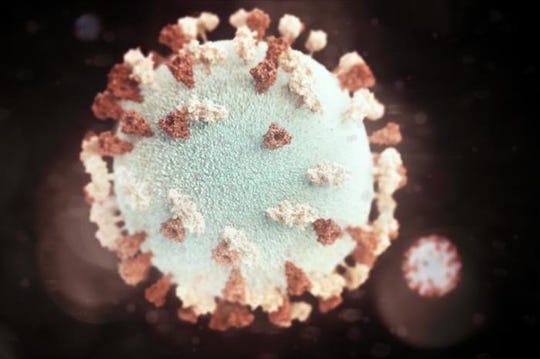 This illustration provides a 3D graphical representation of a spherical-shaped mumps virus particle that is studded with glycoprotein tubercles. (Photo: Courtesy of CDC/ Allison M. Maiuri)

About mumps: The state Department of Health follows the Centers for Disease Control and Prevention's guidelines regarding mumps, Lauffer said.

The disease starts with a few days of fever, headache, muscle aches, fatigue and loss of appetite, according to the CDC, and most people experience swelling of their salivary glands, which causes puffy cheeks and a tender, swollen jaw.

Symptoms usually appear 16 to 18 days after infection. Some people who get infected have only very mild symptoms — or no symptoms — and may not know they have the disease, according to the CDC.

The mumps virus spreads through direct contact with saliva or respiratory droplets from the mouth, nose or throat, the CDC says, meaning it can be spread by coughing, sneezing, talking, sharing cups or water bottles, kissing, and touching objects or surfaces with unwashed hands that are then touched by others.

While most people infected with mumps fully recover, complications such as meningitis and deafness can result, especially to adults, according to the CDC. 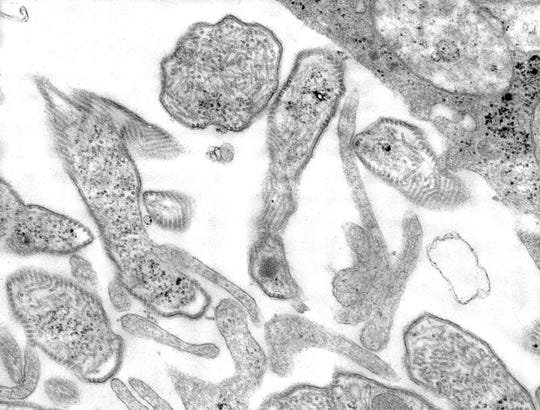 This 1977 thin-section transmission electron microscopic (TEM) image depicted the ultrastructural details exhibited by mumps virus particles that had been grown in a Vero cell culture. (Photo: Courtesy of CDC/ A. Harrison and F.A. Murphy)

Immunization key: There's no specific treatment for mumps, but the best way to prevent the disease is immunizing children with two doses of mumps vaccine, given when a child is about a year old or so and again when the child is between 4 and 6 years old, according to the state Department of Health.

In the 21st century, outbreaks of the disease have primarily been associated with schools, universities and other "congregate settings" where close contact is common, the health department's website states.

For more information about mumps, go to www.health.pa.gov and search for "mumps," or visit www.cdc.gov/mumps.

Editor's note: This article has been updated to include a revised statement from the state Department of Health.