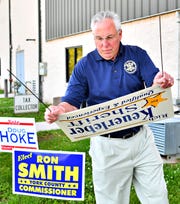 York County Sheriff Rich Keuerleber has helped foster a toxic work environment in his office that has driven out some deputies and left others in fear of being fired for little or no reason, according to York County's former sheriff, as well as current and former deputies.

The sheriff said the work environment in his office isn't toxic and that employees aren't harassed, belittled or threatened by supervisors.

"If you have 115 people working for you, you'll have a certain percentage (who are disgruntled)," Keuerleber said. "It's a good place to work. ... This is obviously a smear campaign."

"The sheriff and his henchmen are ruining deputies' lives," former three-term sheriff Bill Hose told The York Dispatch. Hose served as sheriff from 1996 to 2007 and is a retired York City police chief whose son is one of Keuerleber's two chief deputies.

"He's become so arrogant and cavalier ... and it's just gotten worse over the last three or four years," Hose said of Keuerleber. "The people of York County need to know who's representing them. ... I think I'm doing the right thing by letting people know."

Hose said deputies "in the double digits" have confided in him about what they say are problems in the sheriff’s office. Many are deputies Hose hired prior to retiring and who are his friends, he said.

Morale an issue? "One of the things people keep stressing is his arrogance … and his autocratic rule, and that’s no way to run a railroad," Hose said. "(Deputies) just want to go to work and do their job and be appreciated, not humiliated. If the morale in your department is down, productivity is down.

Keuerleber was first elected sheriff in 2008 after serving six years as a deputy and 12 years as assistant chief deputy, making him a nearly 30-year veteran of the sheriff’s office.

Hose said numerous deputies have told him they resigned or retired because they feared they were being targeted — including for having relationships with, or supporting the candidacy of, Shane Becker.

Becker, a registered Republican, is challenging the sheriff in the Nov. 5 general election. He was narrowly defeated by Keuerleber in May's primary election but received enough write-in votes from Democrats to run against the sheriff on the Democratic ticket.

Bock, who served as a union shop steward before resigning, also used the word arrogant to describe Keuerleber's management style. He, like Hose, maintains the sheriff uses three of his top commanders to intimidate employees. He cited working conditions and supervisor conflict as his reasons for leaving.

"That's the atmosphere we live in," said Bock, who was hired in 2009 and resigned at the end of September. "The department is being run into the ground."

Keuerleber said his office is a good place to work with flexible hours.

"We treat our people with respect," he said.

Speaking out: Bock is one of 16 current and former employees who agreed to speak with The York Dispatch in recent weeks about working conditions at the sheriff's office — some on the record, some off the record. All described the working environment in the sheriff's office as toxic. None defended Keuerleber.

"You can't threaten my job for nothing ... or because I'm good friends with Shane Becker," Bock said. "For months we'd heard that (supervisors created) a list of people who are friends of Shane's, and we said, 'Yeah, right. They're not going to do that.' Then all of a sudden they went after us. ... They've turned it into a complete nightmare."

"Whatever they do off duty, that's their personal (business)," the sheriff said. "If they want to be friends with Shane and support him, they can do that."

But Bock maintains employees of the sheriff's office "are afraid to do anything (and) afraid to say anything" for fear of reprisal. He said supervisors regularly bring up the sheriff's Section 1620 rights to deputies.

1620 rights: Section 1620 of the Pennsylvania County Code gives elected row officers broad discretion to hire and fire employees, and Bock said it renders the deputies' union — they belong to the Teamsters — basically powerless in trying to protect deputies' jobs.

And in Pennsylvania, sheriffs have an avenue to remove deputies without having to fire them. According to the law, deputies must be sworn in each time a sheriff takes office after being elected or reelected, meaning deputies can find themselves unemployed even without being fired.

At least two York County deputies lost their jobs when Keuerleber failed to swear them in again after his last reelection, according to Bock.

"This is how the sheriff rules that department — by 1620 rights," Bock said. "The sheriff takes that as, 'I can tell anybody to do anything I want, and they have to take it.'"

According to Bock, a supervisor recently harassed him for being friends with Becker, reminded him of the sheriff's 1620 rights and started bringing up things from a year ago that Bock had never been disciplined for, such as his uniform apparently being wrinkled on one occasion and Bock not shaving closely enough once.

Manpower issues: The work environment has led to deputies resigning and retiring in large numbers, as well as some being fired, Bock said. He maintains that has created a situation where the office is chronically and seriously short-staffed, and he said more deputies will resign if the sheriff is reelected.

The manpower shortage gutted the sheriff's Criminal Response Unit — which served criminal warrants — because the CRU deputies had to be moved to courtroom security duty to cover all the courtrooms, he said. There were more than 48,000 active York County warrants earlier in 2019, a county spokesman has said.

The sheriff's office has 114 deputy positions and nine civilian support staff positions, according to Keuerleber, who blamed high turnover on deputies leaving to take better-paying jobs.

"The bottom line is, our guys ... leave for higher-paying wages," the sheriff said. "The majority of them have been there quite a few years."

Keuerleber acknowledged that deputies with the Criminal Response Unit did have to be moved into courthouse security positions because of manpower shortages.

"We had to set priorities," he said.

'Treat them right': Becker, who was hired as a York County deputy in 2013 and quit in August or September of 2017, maintains Keuerleber increased the number of deputies being hired and started talking about reviving the Criminal Response Unit after Becker began campaigning on those issues. 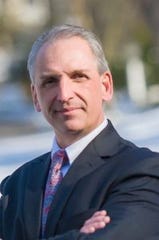 "(Supervisors) can make your life hell there if they want," Becker said. "They throw 1620 rights around like a sword. You don't use that as a weapon against your employees. ... You've got to treat them right."

In early 2018, the office had about 67 deputies, not including supervisors, according to Bock, who said deputies start at $18.68 per hour.

A number of deputies have been hired in recent months, he said, but he noted that most of those deputies must attend Penn State's 19-week academy before being able to perform all deputy duties.

Keuerleber confirmed a number of deputies have been hired recently and said at this point, there's perhaps five deputy positions that remain unfilled.

Successes: Keuerleber has had his share of successes in office.

Current and former employees credit him for streamlining the office's computer system.

The sheriff regularly has deputies assist other county law-enforcement agencies in a number of capacities and has, throughout his tenure, always been willing to meet with reporters and answer any questions posed to him.

In 2010, Operation Clean Slate led to about 565 people with a total of about 1,500 warrants turning themselves in and about $149,000 in fines being collected, the sheriff has said.

In 2017, social-services organizations joined in, and it was renamed Operation Safe Surrender. About 525 people turned themselves in, resolving 1,197 warrants and collecting $18,837 in fines, court costs and overdue domestic-relations payments.