State Rep. Carol Hill-Evans, D-York City, is just one in a bipartisan group of legislators who are hoping the state Supreme Court next week will be wooed by lawyers arguing that the death penalty is unconstitutional. 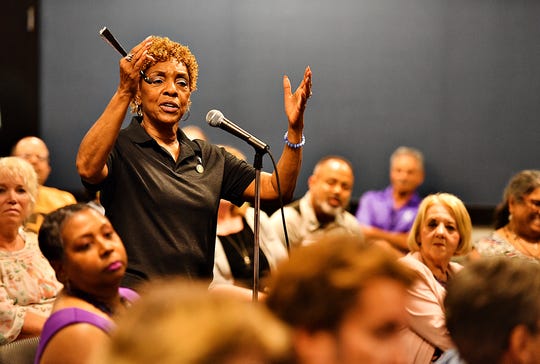 State Rep. Carol Hill-Evans, D-York City, is just one among a bipartisan group of legislators who are hoping the state Supreme Court will be convinced Wednesday by attorneys arguing that the death penalty is unconstitutional.

On Wednesday, Sept. 11, at least four entities will argue in front of the state Supreme Court in a hearing that could ultimately see Pennsylvania's death penalty struck down.

“If we want to be leaders in criminal justice, we need to do away with these archaic laws and abolish the death penalty for good," Hill-Evans wrote in a news release. "This penalty is unjustly applied to minority and low-income individuals more than others."

The session of oral arguments will be the climax to a yearlong effort by lawyers from the Philadelphia-based Federal Community Defender Office, which last year filed a petition asking the Supreme Court to intervene in two high-profile cases and use "king's bench jurisdiction," which gives a state's highest court jurisdiction over the lower courts, to declare the death penalty unconstitutional.

The lawyers represent two inmates sentenced to death in the 1990s: Jermont Cox, who was put on death row for a 1996 murder in Philadelphia; and Kevin Marinelli, who was condemned after killing a man in Northumberland County in 1994.

Since the Supreme Court agreed to take the case, the attorneys have used a variety of weapons in the fight, one of which was a legislative report last year that detailed significant faults in the state's death penalty laws.

The report found that a significant number of death penalty cases were later overturned because of  inadequate legal representation. It also found defendants were more likely to be sentenced to death if the victim was white.

More recently, the Philadelphia District Attorney's Office released a brief after the higher court asked it to look at Philadelphia death row inmates because of the sheer volume of criminals given the death penalty within its boundaries.

The Philadelphia DA's examination found a variety of statistics deemed troubling by those involved. For example, of the 155 cases examined, 72% of the death sentences were later overturned, a majority of which were because of the "ineffective assistance of trial counsel."

The report also found 91% of those on death row were members of minority groups — 82% were black even though black are only 45% of Philadelphia’s population. A heavy majority couldn't afford an attorney.

The Philadelphia DA's office believes the two reports' correlating findings gives the case against the death penalty even more merit.

"The DAO did not base its findings on the report; that's completely separate," said Jane Roh, spokeswoman for the DA's Office. "But it definitely conforms with the report's finding that the death penalty is in serious need for reform and review."

Parties arguing to abolish the death penalty are the Philadelphia DA's office and a lawyer from the Federal Community Defender Office. The state Attorney General's Office and a lawyer representing Republican lawmakers will argue in favor of the penalty.

Pennsylvania Attorney General Josh Shapiro has voiced his support for the death penalty  for "the most heinous of crimes," and he's also opposed king's bench jurisdiction, claiming it's not up to the court to create policies.

Proponents of the death penalty have argued that it is more cost effective than life in prison and deters people from violent crimes.

However, studies have shown putting an individual on death row is more expensive than life imprisonment and that there is no proof to support the deterrent claim.

Hill-Evans also believes it is unconstitutional for another reason.

"It is unconstitutional under Pennsylvania’s ban against cruel punishment," Hill-Evans said. "This does nothing to deter criminals and gives no peace to the families of victims. Furthermore, it eliminates any possibility of rehabilitation.”

The Supreme Court's opinion on the petition, if in favor of the plaintiffs, would buck the trend of unsuccessful attempts from Democrats and some Republicans to make the state the 22nd in the nation to abolish the death penalty.

The proposal has not yet been drafted into legislation.

Pennsylvania has only executed three individuals since 1976. In 2015, Gov. Tom Wolf  levied a moratorium prohibiting the death penalty. It is still in effect.