York City curbside collections to be delayed after Labor Day

Curbside collections in York City will be delayed one day following the Labor Day holiday on Monday, Sept 2.

York City curbside collections to be delayed after Labor Day 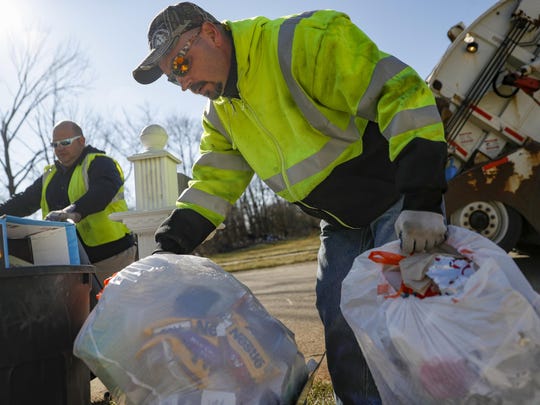 In this March 23, 2018, photo, Route driver Jaime Fisherback, right, and foreman Kenny Lane, left, collect refuse to load into a garbage truck as they work a residential route in Miamisburg, Ohio. Fifty years after two sanitation workers' deaths provoked an historic strike in Memphis, trash collection remains one of the nation's most dangerous jobs. In the first 10 days of 2018 alone, seven sanitation workers were killed in six states, the Solid Waste Association of North America says. The association is working to pass legislation in 16 states, including Ohio, New York, Illinois and Kentucky, creating penalties for motorists who donât slow down and give garbage collectors enough space. (AP Photo/John Minchillo) (Photo: John Minchillo / AP)

Curbside collections in York City will be delayed one day following the Labor Day holiday on Monday, Sept 2.

All regular collections, which include trash, recycling and yard waste, will occur a day late for the entire holiday week. The schedule will return to normal the week of Monday, Sept. 9.

All city offices also  will be closed  Sept. 2 for the holiday. Those with questions should call the city's Public Works Department at 717-849-2245.