The 82-year-old former chief of WellSpan York Hospital's neurosurgery division died suddenly of a probable heart attack Friday in his Spring Garden home after returning from dinner with friends.

Dr. Ivan Butler wasn't just a father. He was also a hero to his children and best friend to his wife of 56 years, his family said on Monday.

The 82-year-old former chief of York Hospital's neurosurgery division died suddenly of a probable heart attack Friday, Aug. 2, in his Spring Garden Township home after returning from dinner with friends.

Three days later, his family focused on his legacy and portrayed him as a man who always put family first.

"We were best friends," said Dr. Francine Butler, Ivan's wife and a retired endocrinologist. "He was a soft teddy bear. He loved York and was born and raised here. ... I respected him, he respected me."

Ivan Butler may best be known for his work at York Hospital. But the York native also had lifelong personal ties in the county, having graduated from York High before attending Franklin and Marshall College in Lancaster.

It wasn't until he studied at Hahnemann Medical College in Philadelphia that he met his future wife. After becoming best friends, they dated for roughly a year before she knew he was the one.

"We realized we wanted to be together," Francine Butler said. "It was a time when a physician couple was unusual. But we worked together and tag-teamed. It was easy. How did you do it? You have to pick the best person who will allow you to do it."

A two-career marriage was uncommon back then, Francine Butler added, as many women stayed at home to care for their families. But even through two busy schedules, the duo managed to get it done.

There was a time when Ivan Butler was on call 24 hours a day, seven days a week. But his family emphasized his workload was never enough to keep him from taking care of his three sons.

"My father was a hero," said Hank Butler, who at 50 is the oldest son. "As busy as he was, he made time for the children. He was the best man at all three of his children's weddings. That shows you the man he was. My dad cared more for others than he did for himself. In a way, I think he is a person we should all aspire to be."

Leon Butler, Ivan's younger brother, who is now 78, said his brother was his best friend and never left him feeling unwanted.

"He was my brother, but he was also my best friend," Leon said. "I tell everyone that in all the years we were together, we never had an argument. Even when we were young, he would go out with his friends and take me with him."

Ivan Butler served as the president of the York County Board of Assistance for eight years as well as on the executive committee of the York County Republican Party, according to his obituary. He was also a member of Temple Beth Israel, the York Jewish Community Center and the Country Club of York. 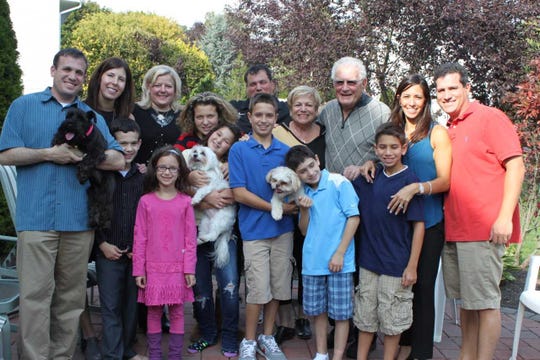 But his community involvement didn't begin in his adult life, Leon Butler said. Ivan Butler was active in the Boy Scouts. Also musically talented, he played the clarinet and saxophone in the York High band.

Ivan Butler was known as a caring, loving man not only by his family but also the community, his family said. And above all, he was a father who left a loving imprint on his family that can't be replaced.

"I respected him more than words can say," Hank Butler said. "He truly was my hero. He was everything to us, and he'd do whatever it takes to help us, protect us and provide for us. That was my father."

Funeral services will be held at 10 a.m. Tuesday at Temple Beth Israel, 2090 Hollywood Drive. The service will be followed by a burial at South Hill Cemetery and a luncheon at the Country Club of York.

The family has requested that in lieu of flowers, donations should be sent in Butler's memory to Pappus House, 253 Cherry St.; the York JCC, 2000 Hollywood Drive; or one's favorite charity.