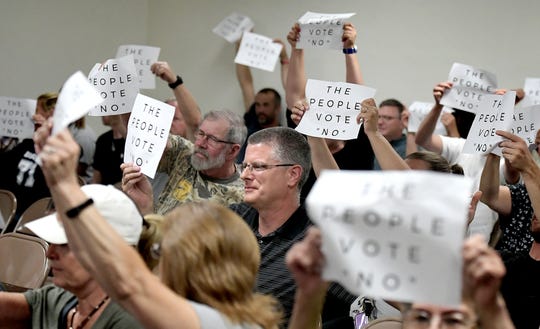 The township's supervisors voted unanimously Tuesday, July 16, to switch to Northern Regional coverage — a decision that was met with frustration from the roughly 40 residents carrying small signs that read "The People Vote 'No.'"

“You people are really deaf!” township resident Cathy Martin shouted at the board after the vote.

North Codorus Township will leave Southwestern Regional Police by the end of the year, marking the end of 17 years of service the department provided to the township.

Township officials, citing rising costs among other things, announced the decision to leave in October.

North Codorus pays about $1 million each year for police service, which is roughly half of the regional department's budget. 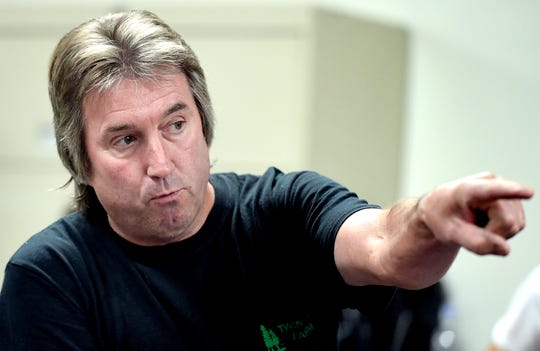 Under Northern Regional, North Codorus Township will pay $744,000 per year for a five-year contract. The department would provide 170 hours of coverage each week to the township.

With Southwestern Regional Police, the township receives about 250 hours of service a week, which supervisors have said is too much.

The township also must provide a two-year notice should it decide to leave Northern Regional Police.

Last month, the board voted to advertise the contract. With Northern Regional, North Codorus Township would be a contract community and would not have a voting member on its police board.

Crowd: The North Codorus Township board almost voted for Northern Regional without allowing public comment, but after a brief adjournment, the board allowed public comment prior to the vote.

Many of the people took issue with the board and its intent to vote that night, especially since the township does not know how much it will cost to leave Southwestern.

“I just have a problem with you three making a fool out of everyone in this room and everyone in this township the last six months," township resident Denny Ilyes said. "You knew this decision was made months ago and you sit here and drug everybody on."

Ilyes, a local business owner, bested incumbent supervisor Rodney Shearer, a Republican, in May's primary. Barring a successful write-in campaign, Ilyes will be a member of the board come next year.

Ilyes said the good thing about what's happened with the police situation is that the people will likely vote board Chairman Nelson Brenneman out, too.

“These people are going to put people up there that represent them and not who do what they want to do themselves," he said.

Paul Cusumano, another township resident, said he started attending the meetings about a year ago to stay informed. One year later, he said he felt his presence and what he says to the board don't mean anything.

Just before the board voted, Sgt. Jamie Stalcup, Southwestern's officer in charge, asked board member Dennis Luckenbaugh to join Southwestern's police board and help fix the situation with the department.

“It ain’t time to quit, it ain't time to go home,” Stalcup said.

However, Luckenbaugh declined, and the three township supervisors voted to contract services with Northern Regional.

“You guys have made this a frustrating experience," township resident Emily LeVault said after the vote.

Future: Also after the vote, Shearer, who serves on Southwestern's police board, said police board members are exploring potentially having Northern Regional Police serve the other Southwestern municipalities.

"Hopefully there's a good outcome coming from that," he said.

Shearer said after the meeting that he supported that idea, adding that Northern Regional could do more for the communities because of its size.

"I think it would be an outstanding outcome," he said.

Northern Regional Chief Mark Bentzel said between Paradise Township, Jackson Township and now North Codorus Township, there will be a combined 445 hours of service a week in the general area of Southwestern's territories.

“We’re willing to talk about providing service to any other municipality that’s currently in Southwestern," he said.

The chief said there are some logistical things that will have to be done before the start of the year, such as hiring four more officers and knowing some of the services, such as towing, that residents use.

“We’re going to do our very best to provide them the best service possible," Bentzel said.

Southwestern's police board is still determining an exit fee for North Codorus Township, and some have estimated it would be $1 million. Shearer has said the township estimates it will be lower, but on Tuesday he declined to say what the number is, adding that the separation agreement is still under negotiation.

Northern Regional, the state's first regional police department, formed in 1972 and has 54 officers.

Southwestern, which formed in 2002, would be fully staffed at 14 officers. However, currently only eight active officers are with the department.