Jennifer Miller had always secretly hoped she would receive a military homecoming surprise like she has seen on the internet. But that is just unrealistic, she thought.

Jennifer Miller had always secretly hoped she would receive a military homecoming surprise like she has seen on the Internet. But that is just unrealistic, she thought.

Yet at a York Revolution game last week — on the field under the guise of throwing a ceremonial first pitch to honor her son, U.S. Marine Cpl. Shane Miller — the Dallastown native's wish was brought to life by a seemingly unknown catcher.

"I thought it was a bad pitch, so I was going to shake the catcher's hand and say 'sorry,'" Jennifer  said as she recounted the moment before Shane took off the catcher's mask to reveal himself. "Then I was flooded with emotion. I grabbed ahold (of him) and held on for dear life, because it was hard to believe it was actually him."

Shane Miller had been stationed in Okinawa, Japan, for the past two years, and he and his mother were only able to contact each other about every other month. 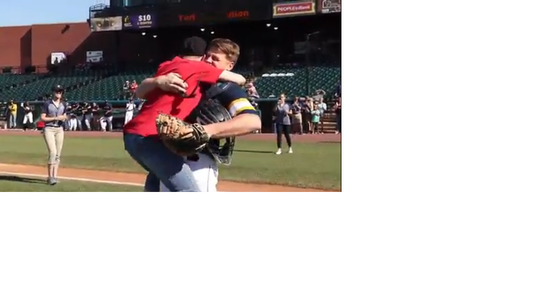 Now 23 years old, he graduated from Dallastown Area High School four years ago and immediately enlisted in the Marine Corps, something he had always wanted to do.

Although Jennifer Miller constantly missed her son while he was gone, she knew the Marines would take care of Shane and keep him safe. After all, her grandfather and nephew also were in the Marine Corps.

"I knew he was taken care of," Jennifer Miler said. "But when that phone would ring at an odd hour of the day, your heart drops because you don't know if it was a good call or a bad call."

His maternal grandparents also had no idea he had returned. After the game, Jennifer played a trick on her parents by telling them she wanted to show them pictures from the game.

Shane  then walked through the back door, giving his grandparents the same loving surprise that his mother had received earlier that day.

Now that he's back in York County, Shane plans to stay in Dallastown  for now and get back into his civilian life, Jennifer said. And she knows what the two will do first.

"The one thing I'm dying to do is bring him a good meal, sit down, watch some movies and just hang out," she said. "We don't even have to talk. Only if he wants to."