The fire that claimed the life of a West Manchester Township woman last week was deemed accidental, according to a fire official. 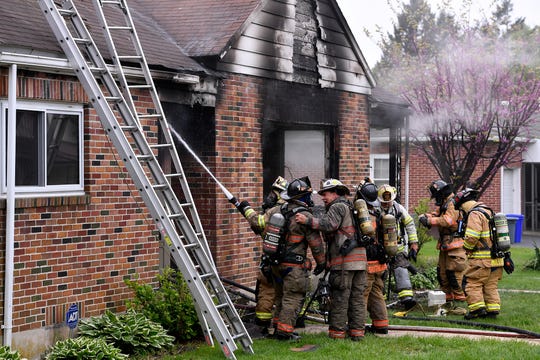 The coroner has been called to the scene of a house fire in the 2200 block of W. Philadelphia Street in West Manchester Township, Wednesday, May 1, 2019. John A. Pavoncello photo (Photo: The York Dispatch)

The fire that claimed the life of a West Manchester Township woman last week was caused by careless smoking, according to a fire official.

Township Fire Chief Clif Laughman said the fire Wednesday, May 1, in the 2200 block of West Philadelphia Street, started in the living room, where 73-year-old Linda Aponte had been smoking.

Laughman said Tuesday, May 7, that the fire was deemed accidental.

Aponte, who was disabled and on oxygen, died at the scene, according to York County Coroner Pam Gay.

Explosion: Some neighbors nearby reported hearing a rumbling sound at the time of the fire, which Laughman said was the sound of an oxygen tank exploding from the flames.

He said the tank itself did not cause the fire, but it enhanced it.

“It made the atmosphere more oxygen rich," he said.

Crews were called to the scene of the fire about 12:30 p.m. that day, and the coroner's office was called shortly after.

Firefighters took about an hour to bring the fire under control. The home was considered a total loss.

Emergency responders tried to save Aponte but were unable to get in because of the size of the fire.

Two residents who were inside the home at the time tried saving her as well, but they were unsuccessful, according to the chief.

Laughman said the fire caused $124,000 in damage. Four people were displaced in the blaze, according to the chief.

Laughman also said a cat perished in the fire.

No autopsy will be done on Aponte, but a routine toxicology test is pending, Gay has said.

The cause and manner of Aponte's death are pending investigation.