The National Weather Service said the watch will go into effect 2 p.m. Friday, April 19, and last until 11 a.m. Saturday, April 20. 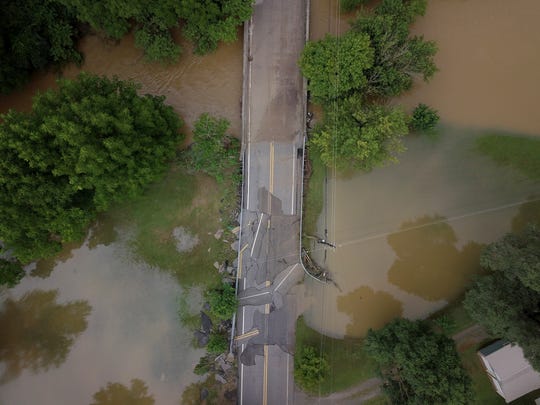 Flood waters from the south branch of the Codorus Creek ripped the blacktop surface from Glatfelters Station Road in North Codorus Township, Wednesday, July 25, 2018. Neighbors say the water lifted the road into the air around 7 a.m. and then broke it into chunks. John A. Pavoncello  (Photo: The York Dispatch)

A flash flood watch has been issued for York County starting Friday afternoon.

The National Weather Service said the watch will go into effect at 2 p.m. Friday, April 19, and last until 11 a.m. Saturday, April 20.

A cold front could bring heavy shower and thunderstorms Friday, which could cause flooding, according to the weather service.

There could be flooding in normal low-lying and poor drainage areas and also along some regional streams and creeks, the weather service said.

Adams, Lancaster, Cumberland and Dauphin counties are included in the watch as well.