Residents helped rescue a man trapped in a burning car in York City on Saturday, March 9 before fire crews made it to the scene, according to York City Fire Chief Chad Deardorff. 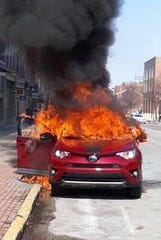 Residents helped rescue a man from a burning car on the corner of Market Street and George Street in York City on Saturday March 9, according to the fire department (Photo courtesy of the York City Fire Department). (Photo: Submitted)

Residents helped rescue a man trapped in a burning car in York City on Saturday, March 9, before fire crews made it to the scene, according to York City Fire Chief Chad Deardorff.

The fire was reported about 11:20 a.m., in Continental Square at the corner of Market and George streets.

It was called in as a vehicle fire with someone trapped inside, Deardorff said.

When crews arrived, they found an involved fire — but the man had been pulled out by residents who stopped to help, the chief said.

"I want to thank the good Samaritans for stopping. Without them, this could have been a significantly different outcome," he said.

The man was transported to an area hospital for treatment. Deardorff said the man sustained burns but that the full extent of his injuries was unknown.

Deardorff said he has yet to have a chance to speak with the man who was inside the car to better understand the events leading up to the fire.

— Rebecca Klar can be reached at rklar@yorkdispatch.com or via Twitter @RebeccaKlar_.