Some members of the overwhelmingly white Hanover community are confused about a recent racist flyer circulating the borough. 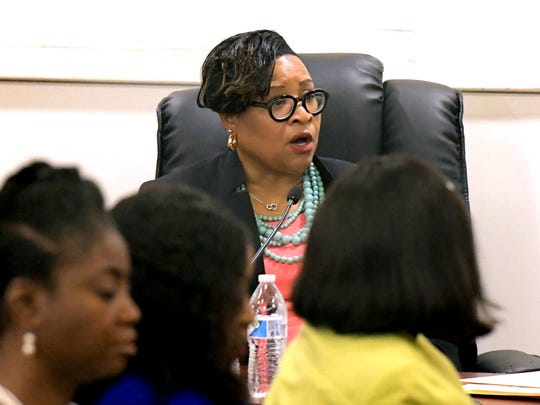 Myneca Ojo gives testimony during the second Pennsylvania Human Relations Commission hearing at York City Council Chambers Friday, June 22, 2018. The hearing was in response to allegations that she and four other members of the Sisters in the Fairway were racially harassed during an incident at Grandview Golf Club in April. Listening to testimony were, foreground, from left, Sandra Thompson, Carolyn Dow and Sandra Harrison who are members of the group. A fifth member, Karen Crosby, also attended. Bill Kalina photo (Photo: The York Dispatch)

Some members of the overwhelmingly white Hanover community were taken aback about a recent racist flyer circulating throughout the borough.

But this is the same community where, almost 30 years ago, violent race riots erupted in the town square.

In 1991, the riots spawned from black men dating white women in the predominantly white community, according to a report from The Baltimore Sun at the time. Today, the tensions stem from the recent appointment of the borough's first female African-American mayor.

"I never thought we'd have real racism in this town," Eric Burns, a Hanover resident and business owner originally from Baltimore, said on Saturday.

An anonymous flyer circulated in Hanover last week. It leveled unfounded racist claims at Mayor Myneca Ojo, who was appointed to the post in October.

The propaganda is an archaic tactic and waste of time, said Burns, owner of Merlin's Coffee & Tea in Hanover.

The flyer claims Ojo is trying to install affordable housing units, which would "curse Hanover with 'diversity' and 'inclusion,'" as well as increase local taxes. Those attacks are all false, said Borough Manager Michael Bowersox.

"There was nothing factual in that flyer other than two or three pages copy and pasted of how to run for office in York County and the list of contact information for the council members," he said.

As a borough in Pennsylvania, Hanover has a weak mayor system, with the borough council holding almost all of the power. 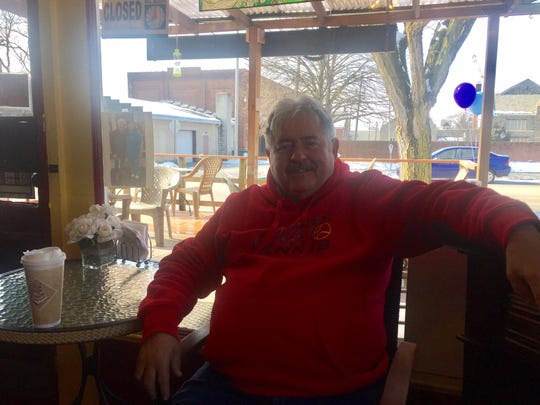 Jim Greene, a Littlestown resident originally from the Philadelphia area, said those sorts of "narrow focused" and xenophobic sentiments can be common in smaller towns hesitant to welcome outsiders.

The violent 1991 riot filled the borough square with 400 people, with men going at each other with baseball bats, knives, tire chains, bricks and hockey sticks, The Baltimore Sun reported.

Rich Heiland, publisher of the Hanover Evening Sun at the time, told The Baltimore Sun the issue was ignorance. Most of the residents didn't know any black people, he said.

The borough population is overwhelmingly white — 86 percent, according to the most recent census data — whereas 1.1 percent is black or African-American. Hispanics are the largest minority in the borough at 12.7 percent of the population, and Asians, at 1.8 percent, are second.

Residents of the small borough can sometimes be closed-off or sheltered, Burns suggested.

He's heard some residents say York is the most exotic place they've been.

Greene said he recently met Ku Klux Klan members and was "surprised this vehement racism still existed." It wasn't something he had experienced in the more diverse Philadelphia suburb where he lived before moving to the area, he said.

The population of Hanover is overwhelmingly white, according to the most recent U.S. Census data. (Photo: The York Dispatch)

Bowersox said the situation is disappointing and not indicative of the attitude he's seen from most borough residents.

"(Ojo has) been warmly received by the residents and the council and the borough staff," he said.

Ojo agreed and said she believes the flyer was created by someone outside the Hanover community to evoke fear and attempt to divide Hanover.

In addition to the racist remarks, the flyer's claims that Ojo is a "Socialist Marxist Racist invader from the People's Republic of Harrisburg" who was appointed by "Pinko Commie-lib morons" are outdated, Burns said.

"Who calls someone a commie? It's not the McCarthy era anymore," he said.

Burns said he can understand people having differences in opinions but not propaganda like the flyers circulating around the borough.

"Trumpers and anti-Trumpers I understand, but pure racism is about as stupid as the day is long," he said.