A woman was taken to York Hospital for smoke inhalation after a fire started in her York City apartment Monday morning, according to a fire official. 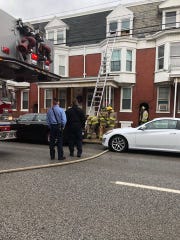 A woman was taken to York Hospital for smoke inhalation after a fire started in her York City apartment Monday morning, according to a fire official.

Deardorff said a woman in the third-floor apartment forgot to turn her stove burner off after cooking, and the burner ignited some grease on the pan.

Crews responded to the scene about 9 a.m. Deardorff said it took about 10 minutes to have the fire under control.

The fire was contained to the kitchen in the third-floor apartment. Deardorff said everyone in the two-unit apartment home is currently displaced.