Residents were trapped on the front porch roof of a Monaghan Township fire early Monday morning, according to a fire official. 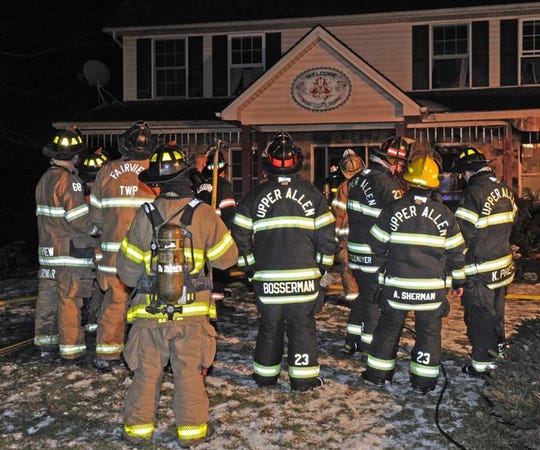 Residents were trapped on the front porch roof of a Monaghan Township home during a fire early Monday morning, according to a fire official.

Additionally, numerous dogs perished in the blaze, according to the fire chief.

Cosey said the damage was confined to the dining room of the two-story home, but there is still smoke damage throughout the home.

Fire: Cosey said crews arrived about 2 a.m. to see smoke coming out of the front of the home.

“The occupants were out on the porch roof," he said.

The assistant chief said he was told that the residents, a man, a woman and at least two children, had to go to the porch roof to escape the blaze.

The fire was at the base of the stairs, making it hard for them to leave, he said. Cosey also said the home had smoke detectors, but they were not working.

Cosey said he was told the man jumped from the roof to the ground — about 9 to 12 feet — and caught the children handed down from the woman on the roof.

The woman waited until firefighters arrived to get down, the assistant chief said. All of the residents were taken to Hershey Medical Center for treatment, he said, but he did not know the extent of their injuries.

One dog was resuscitated at the scene, according to the assistant chief, who said the dog was taken to an animal hospital for treatment.

Numerous other dogs were found dead in the home, according to Cosey.

The fire is believed to have been electrical, he said.

Cosey said the fire looked worse than it was, so additional manpower was called to the scene.

“The fire was brought under control quickly," he said.

Cosey did not have a damage estimate Monday morning. He said firefighters cleared the scene about 4 a.m.

“It took a while to get things all cleaned up,” he said.