A fire at a York City quarry caused $1 million in damage early Tuesday morning, according to a fire official. 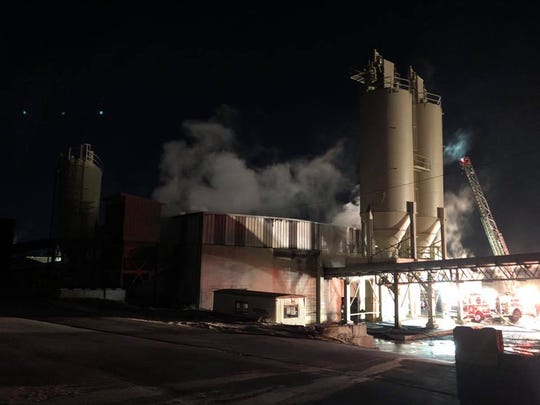 Crews responded to a fire in two buildings at a quarry in the 900 block of North Hartley Street Tuesday, Jan. 22. Photo courtesy of York City Fire Department. (Photo: Submitted)

A fire at a York City quarry caused $1 million in damage early Tuesday morning, according to a fire official.

York City Deputy Fire Chief Chad Deardorff said the equipment and materials damage coupled with the damage to two buildings at the quarry in the 900 block of North Hartley Street totaled $1 million.

He said the crews were called to the quarry when York City Police spotted the fire about 1:30 a.m. Tuesday, Jan. 22.

A front-end loader caught fire at some point between when the quarry closed about 4 p.m. Monday, Jan. 21, and 1:30 a.m. Tuesday.

“Pretty sure it was on fire for a while and smoldering for quite a bit of time," Deardorff said.

He said it looked like the fire was caused by a mechanical issue.

"We know it's an unintentional fire," he said.

Neil Seidenstrick, director of environmental health and service for the company, said York Building Products does not own the business there.

Fire: The fire damaged the building the equipment was in and a conveyor belt inside the building, according to the deputy chief.

That conveyor belt is connected to another building, according to Deardorff, who said the fire spread from the conveyor belt to the second building.

Crews took about 45 minutes to an hour to have the fire under control, he said. Firefighters were there for a few hours clearing the scene.

He said firefighters who got wet were quickly taken to warmth while there Tuesday morning. Other than that, the single-digit temperatures did not affect crews, Deardorff said.