A $52,800 check from a handful of local organizations is what Lou Rivera says will lay the foundation for a variety of endeavors to benefit the Latino community. 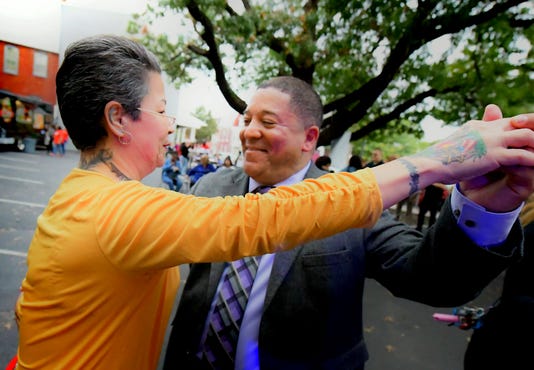 A $52,800 check from a handful of local organizations is what Lou Rivera says will lay the foundation for a variety of endeavors to benefit the Latino community and more.

Rivera, chairman of the local Latino-advocacy nonprofit Latinos Unidos of York, has dedicated most of his three years in York City to fighting issues facing Latinos throughout York County.

Those issues proved more prominent than ever after the United Way of York released an assessment of the county's Latino community in July 2018. The assessment was conducted by Vinny Cannizzaro, a public policy fellow at the Arthur J. Glatfelter Institute for Public Policy at York College.

The report detailed troubling statistics about the county's Latino population, such as a 50 percent unemployment rate and a severe lack of resources to help the growing segment flourish.

A handful of local organizations pooled together more than $52,000 to fund a consultant for local Latino-advocacy nonprofit Latinos Unidos of York. (Photo: Submitted.)

The next level: "The investment the United Way initially made brought out some great statistics in the Latino community, which allowed us to take it to the next level," Rivera said. "That's where we're at."

The funding will be used to pay David Acosta, president of Venture Clarity, an Orlando, Florida-based marketing and business development firm, to draw up a strategic business plan for Latinos Unidos and help it grow.

With Acosta's help, the nonprofit will solidify itself as a stable, effective organization and make it easier to seek additional funding to provide resources to the community, such as a Latino community center, Rivera said.

Acosta has previously done similar work in Lancaster County, which also has a large Latino population. The work is expected to be done around May but might take longer, Rivera said.

To some, it might seem like it's taken too long for action to be taken in response to the initial assessment, but that's not the case, United Way Executive Director Anne Druck said.

”It seems from the outside of things that things have stalled," Druck said. "But it’s more like the stars are lining up to take the initial work and investment that the United Way made and get things done."

Bob Woods, who at the time was executive director of the United Way before he retired in June, approved $12,000 to fund the study and deserves a "special thanks," Rivera said.

Rivera said he went to great lengths to acquire funding to benefit the growing population.

"It's being relentless; it's not giving up," Rivera said. "There's times where you feel it's just a lot of work for a few people. But I'm really excited about where we're at; this is just the icing on the cake. Now it's time to work with our consultant."

York Traditions Bank President Gene Draganosky, like the other heads of the organizations that donated, said Rivera's efforts made a lasting impression.

"We think that Latinos are an important and growing segment of our community," Draganosky said. "We'd like to see Lou and the board be successful. It didn’t take us a whole lot of thought because of our respect for Lou.”

Rivera said thanks to the funding from organizations such as Draganosky's and the work that will be done by Acosta, he's confident Latinos Unidos will make a lasting impact on not just the Latino population but the community as a whole.

Most importantly, he noted, the nonprofit will be self-sufficient in its efforts.

"All we want to do is better the lives of our Latino and Spanish-speaking community with a better education, healthy habits and workforce development — things that benefit the community as a whole."