After five months of searching, York City administration offered up a candidate to fill the vacant business administrator position. Council will vote on Jan. 2.

The York City Council will vote on  W. Glenn Steckman III's confirmation during its Wednesday, Jan 2, meeting, according to a draft agenda.

Steckman became the managing director for the city of Reading in June 2016, and he was one of three city employees fired the week of Sept.18, according to the Reading Eagle.

He held a news conference the day after his termination, saying the city of Reading "is now unstable" and claiming the media was alerted to his firing before he was notified, according to the newspaper.

A number could not be reached to contact Steckman, and Reading officials did not return a call for comment.

More: New owners seek input on future of The Accomac after $1M sale

At his news conference, Steckman told reporters he was called late the night of Sept. 10 and asked to give immediate advice to a friend of Reading Mayor Wally Scott regarding a personal situation, according to the Eagle.

Steckman said he made the call, but he did not elaborate further, the newspaper reported.

Around 9:50 p.m. on Sept. 12, Steckman said, Scott called to tell him he would be placed on administrative leave, according to the Eagle.

Before the news conference, Scott said he asked Steckman to release him of liability so he could explain to the public, according to the Reading Eagle. Scott also denied sending media copies of Steckman's termination letter, the newspaper reported.

Neither Scott nor Steckman gave a reason as to why Steckman was fired, according to the Reading Eagle.

'Most qualified': Helfrich said he would not comment on his potential new hire but added that Steckman was chosen "because I thought he was the most qualified candidate."

The York City mayor said his administration received 27 applications. The search narrowed to six, and two of those candidates withdrew before interviews began.

'Personnel issue': York City Councilman H. Michael Buckingham said he could not comment on Steckman because "it's a personnel issue."

However, he said the council has been discussing the candidate.

"I can't say what we are or are not aware of," Buckingham said. "We're in middle of that discussion."

The other four council members did not return calls for comment on Friday afternoon.

If approved by council members, Steckman's starting salary in York will be $106,000, according to the draft resolution. 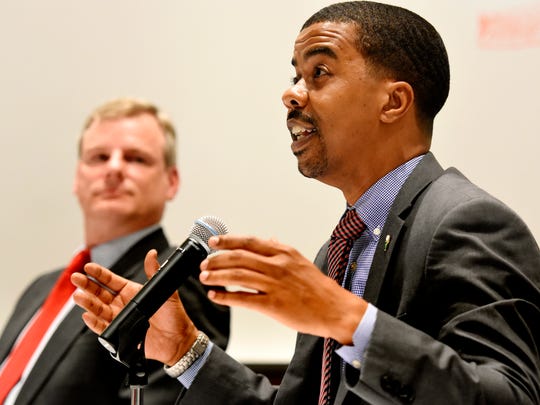 The position: The York City business administrator's responsibilities include supervising and coordinating the administrative functions of all city departments, according to city officials.

Other duties include assisting the mayor in preparing the budget, administering a centralized purchasing system, supervising personnel policies and maintaining oversight of city expenditures.

Helfrich said the Reading city managing director position is similar to that of York's business administrator.

Doweary's salary in 2018 was $110,000 after receiving a $16,000 raise approved in the 2018 budget vote. Helfrich, then council president, was one of two to vote against the budget, citing the administration raises as his reason.

Wednesday's meeting will begin at 6 p.m., starting with a public comment section on non-agenda items.