Pennsylvania Auditor General Eugene DePasquale is pushing for federal lawmakers — especially a group the House's most conservative members — to stop collecting paychecks amid a government shutdown.

Pennsylvania Auditor General Eugene DePasquale is pushing for federal lawmakers — especially a group of the House's most conservative members — to stop collecting paychecks amid a government shutdown.

“Congressional paychecks should be stopped immediately during the shutdown," DePasquale wrote in a Wednesday, Dec. 26, statement. "Members of the Freedom Caucus should lead by example and stop accepting their paychecks until the issue is resolved."

Rep. Scott Perry, R-Carroll Township, is one of the roughly 36 members of the ultra-conservative caucus. But he insists the group can't take all of the blame, as 217 Republicans voted affirmatively when the spending bill passed the House on Thursday, Dec. 20.

"If the Freedom Caucus were so powerful, it'd have solved the border security issue long ago, as it’s trying to do with many other promises made to the American people," Perry said. 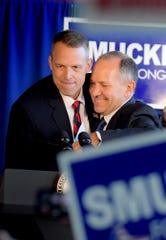 The shutdown: The shutdown took effect at midnight Friday, Dec. 21, after Senate Democrats refused to give in to President Donald Trump's demands to pass a spending bill amendment that would provide $5.7 billion in funding for a southern border wall.

The stalemate affects 25 percent of government agencies that rely on Congress for funding. Roughly 420,000 workers were deemed essential and are working without pay, while an additional 380,000 have been furloughed. Attractions such as Philadelphia's Liberty Bell and the Gettysburg National Military Park are also affected.

"Hundreds of thousands of government workers — and countless Americans denied access to national treasures — are paying the price for the stubborn stalemate in D.C.," DePasquale wrote.

The auditor general demanded lawmakers in both chambers go without pay, just like the affected employees who won't see their paychecks until the shutdown is resolved.

Although repudiating DePasquale's decision to place blame on the Freedom Caucus, Perry said he agrees lawmakers — including himself — should be denied paychecks.

Withholding pay: "I immediately requested that my pay be withheld — once again — which I’ve done in every instance of a government shutdown, including my time as a state representative," he said. "If Congress fails to do their job, they should not be paid."

Rep. Lloyd Smucker, R-Lancaster, didn't comment on whether he'd support his pay being withheld. Instead, he focused on lawmakers' inability to work together and create a balanced budget.

"Congress' inability to pass a budget in regular order is the root of our problem," Smucker said. "Our budget process is totally broken. It needs reform."

The soon-to-be representative of the newly drawn 11th District, which consists of Lancaster County and half of York County, previously proposed legislation to prevent a government shutdown.

In April 2017, Smucker introduced the Government Shutdown Prevention Act, which would provide continuing appropriations to prevent a shutdown for any spending bill that isn't completed by the end of the fiscal year. If a budget still isn't completed after 120 days, funding levels would be reduced by 1 percent every 90 days. The bill still lies in the hands of the House Appropriations Committee.

"If we had a balanced budget — which I’ve fought for every year since being in Congress — we wouldn’t be in this position in the first place," Perry said.

The shutdown is expected to last into the new year and will continue until Congress and Trump come to an agreement regarding border funding or a lack thereof.