Platts: Bush 'one of the real heroes of our nation'

Speaking a few years ago, former Congressman Todd Platts recalled voting for Bush during the 1980 primary, and said he helped with Bush’s presidential campaign in 1988.

Platts: Bush 'one of the real heroes of our nation'

During his 1989 inauguration speech, President George H.W. Bush talked about a legacy of compassion, which continued to show long after leaving office. York Dispatch 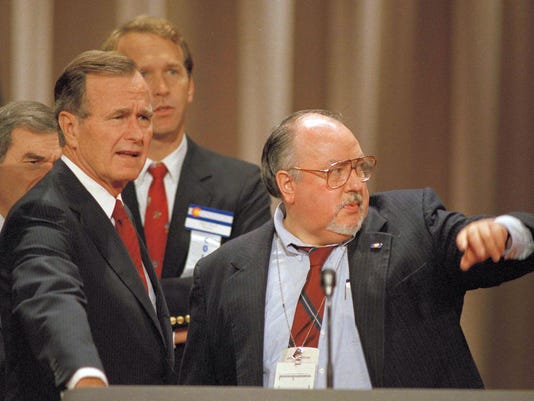 FILE - In this Aug. 17, 1988 file photo, Vice President George H.W. Bush, left, gets some advice from his media advisor, Roger Ailes, right, as they stand behind the podium at the Superdome in New Orleans, La., prior to the start of the Republican National Convention. Fox News said on Thursday, May 18, 2017, that Ailes has died. He was 77. (AP Photo/Ron Edmonds)(Photo: Ron Edmonds / AP)

Speaking a few years ago, Platts recalled voting for Bush during the 1980 primary, and said he helped with Bush’s presidential campaign in 1988.

“He just had a remarkable career,” the six-term Republican congressman said at the time.

Before that, Platts and his family had attended a commissioning ceremony for the USS George H.W. Bush.

“The commissioning was such a wonderful tribute to his service,” he said.

At the inauguration ceremony, Platts said he briefly spoke to the former president, mentioning the commissioning ceremony.

“He turned around and said to me, ‘Wasn’t that great fun?’” Platts recalled.

“My response was ‘Mr. President, it absolutely was,’” he said.

Platts said he commended the former president’s statesmanship and service.

“He sets the example for me and for anyone who wants to carry public office,” Platts said.

He recalled how Bush became friends with President Bill Clinton, who beat him in the 1992 election.

“That type of statesmanship, is unfortunately, more and more lacking in the political arena today,” he said.

Platts said Bush’s service to the country was “selfless.”

“With history, he will be regarded as one of the real heroes of our nation for his service in so many ways,” Platts said.

According to York Dispatch archives, the former president campaigned in downtown York City while vice president in the fall of 1988.

He stopped in Monaghan Township in June 1992 for a fundraising dinner for U.S. Sen. Arlen Specter.

His last stop, according to records, was in May 1999, when he spoke at the Strand-Capitol Performing Arts Center for the Junior League of York.