A retired York Twp. couple with a deep appreciation for working police dogs have donated a new ballistic vest to the York County Sheriff's Office. 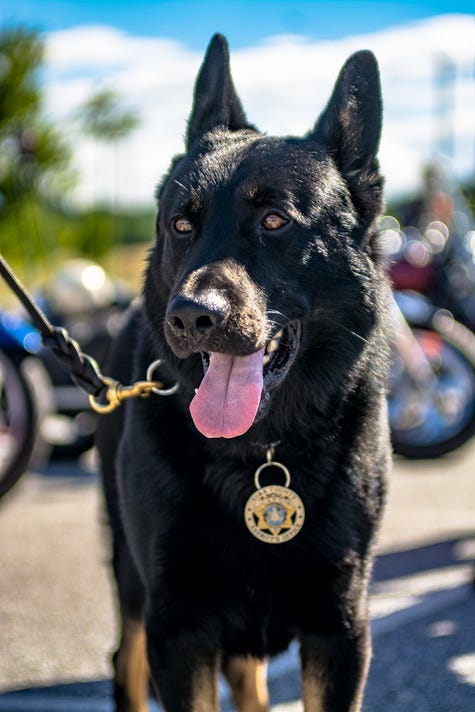 A retired York Township couple with a love of German shepherds and a deep appreciation for working police dogs have donated a new ballistic vest to the York County Sheriff's Office.

The bullet- and stab-resistant vest will replace the one currently worn by K-9 Capt. Dargo, who just turned 7 years old and has been working for the sheriff's office for 5½ years. Dargo's ballistic vest expires in December, according to his handler/partner, sheriff's Lt. David Godfrey.

Ballistic vests for K-9s are no different than for human officers, Godfrey said, explaining that both last just five years before needing to be replaced.

They support a Massachusetts-based nonprofit organization called Vested Interest in K9s and last year bought a vest, which ended up going to a Massachusetts K-9 police dog, Leibert said.

He said he thought that this year, he'd like to help a local K-9.

"So this time, I contacted the sheriff's office," and told them he'd like to buy a ballistic vest for one of their K-9s, assuming one of the dogs needed one, Leibert said.

"(Lt. Godfrey) emailed me back in about 15 minutes," he said. "If this is one of the few small things I can do to help, that's wonderful." 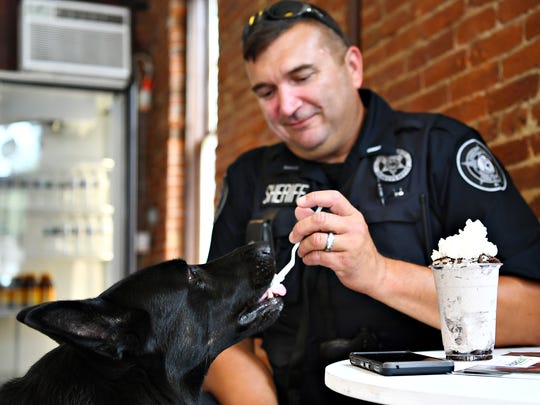 Leibert said he plans to donate vests to police dogs for the rest of his life — locally, if possible, but anywhere is fine.

"It'll help, no matter where it goes," he said.

Training is key: Leibert said he admires how well trained K-9s are. He said he has always gone through training with the German shepherds he and Barbara have owned over the years.

The Leiberts adopted their first shepherd, a snow-white girl named Nicki, when they lived in Utah. 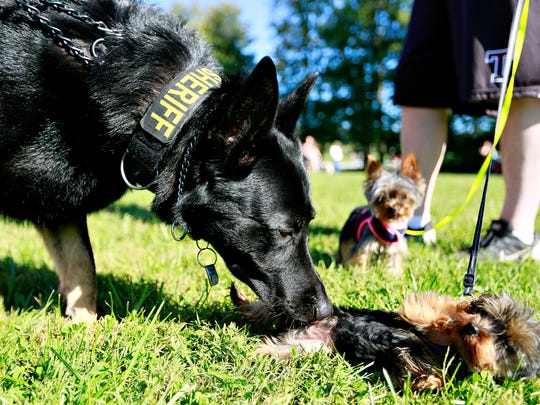 Leibert said he and Nicki "learned a whole lot" going through obedience training together.

"She loved kids," Leibert said, and logged quite a few miles with Barbara, who enjoys walking. Leibert said Nicki was loving, loyal and protective of her humans.

"Every shepherd we've had so far has been pretty much that way," he said.

The Leiberts' second shepherd, Ginger, enjoyed meeting people on walks with Barbara, especially the ones who brought her treats, Leibert said.

Their third dog, Chai, was a mix of Alaskan malamute and German shepherd who had an affinity for women in wheelchairs, he said. 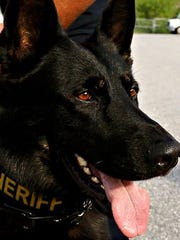 "We're between dogs now," Leibert told The York Dispatch. "I keep looking. The next one will be another shepherd — I don't even look at other dogs."

Community support: Godfrey said the York County Sheriff's Office K-9 Unit receives quite a bit of support from the community, for which they are thankful.

"York County has always been here for our K-9s," the lieutenant said. "It's awesome to have a community that's willing to help like this one does."

The sheriff's three K-9s respond to a total of 100 to 110 calls every year, according to Godfrey.

"You never know what environment you're going into," he said, which is why the vests are so critical to keeping the dogs safe.

"We need to keep the dogs safe," Godfrey said, and the ballistic vests help.

Vested Interest: The K-9 vests utilized by Vested Interest in K9s are valued at between $1,744 and $2,283, but by going through the nonprofit they cost $950, according to the organization's website. Each vest is custom-fitted, the website states.

Established in 2009, Vested Interest in K9s has provided more than 3,000 vests to police dogs in all 50 states through both private and corporate donations, with a total value of $5.7 million, the website states.

For more information about Vested Interest in K9s, visit www.vik9s.org.