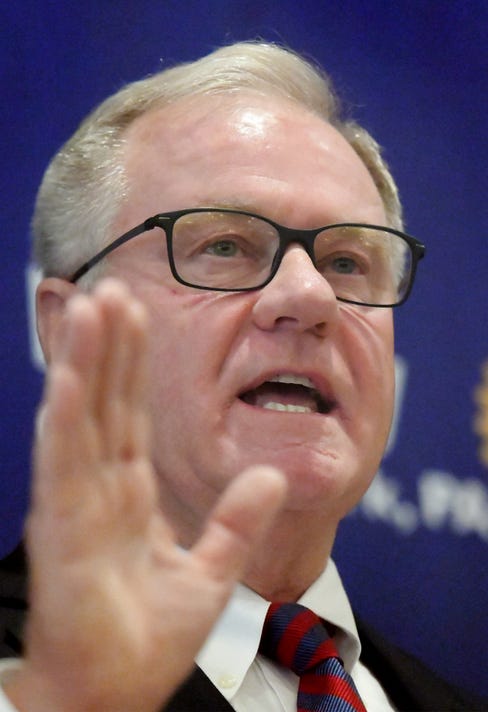 Gubernatorial candidate Scott Wagner speaks during a Rotary Club of York luncheon at the Country Club of York Wednesday, Sept. 12, 2018. He outlined his plan to battle the opioid crisis in the state. Bill Kalina photo(Photo: Bill Kalina, The York Dispatch)Buy Photo

The Students First PAC was co-founded in 2010 by Joel Greenberg, a board member of the American Federation for Children, a Koch brothers-backed national group once chaired by DeVos.

The Students First PAC touts its partnership with the federation on its website.

Since being approved as the Secretary of Education in January, DeVos has come under fire for promoting her "school choice" education platform at the expense of traditional public schools.

The platform entails increased financial support of charter schools and other nontraditional schools as well as school voucher programs.

Wagner and charter schools: Wagner has shown his own interest in backing charter schools and more — he loaned hundreds of thousands of dollars to the now-shuttered Helen Thackston Charter School in York — and his campaign and Gov. Tom Wolf's have shared blows regarding each other's education plans for months.

The plan calls for "education opportunity" to give options to students who are "trapped" in the public school system.

As a result, the plan would spread more education funding to charter schools, cyber schools and the like.

When asked about whether Wagner agrees with DeVos' educational stances, campaign spokesman Andrew Romeo ignored the question and referenced the candidate's desire to increase school funding without raising taxes.

“It should come as no surprise that Betsy DeVos is funding Wagner’s campaign, because they share the same anti-education policies that would take Pennsylvania backward,” said Wolf campaign spokeswoman Beth Melena. “This Wagner-DeVos agenda would be disastrous for Pennsylvania schools.”

Wagner has been critical of what he interprets to be Wolf's stance on education as well.

Currently, a small slice of the state's education funds are put through a "fair funding formula" that takes into account schools' poverty levels, student enrollment and tax effort and distributes money accordingly.

Wolf said earlier this year that all education dollars should go through the formula, but he clarified that such a change would take time.

Still, Wagner accused the governor of wanting an immediate shift to put all of the funds through the formula and claimed cuts to school districts would follow.

But Wolf has since clarified that putting all education dollars through the formula would take time, additional funding and input from the General Assembly and school districts.