York City and local organizations have agreed it's about time the city erects its first statue of an African-American to reflect the city's diverse history, and fundraising efforts are already underway.

Goodridge House may partially open by May.

Carol Kauffman, Community Outreach Director of the Crispus Attucks Association, shows the hidden room used in the Underground Railroad at the Goodridge House Tuesday, Feb. 23, 2016. She said she is hoping to open the first floor this May for an open house to celebrate Crispus Attucks 85th anniversary. Bill Kalina photo(Photo: The York Dispatch)Buy Photo

York and local organizations agree it's about time the city erects its first statue of an African-American to reflect the city's diverse history — and fundraising efforts are already underway.

The statue would not only serve as a landmark for the museum at 123 E. Philadelphia St., she said, but it also would  introduce the city's arts district and fulfill the need to reflect the role African-Americans have played in York.

"Mr. Goodridge is a big part of our history that people are just now learning about," Kauffman said. "This makes it very important to make it the next statue to put up, to recognize his accomplishments not only for freedom seekers but also for the City of York."

Goodridge was born a slave in Baltimore but eventually grew to be a successful entrepreneur in York City, where he owned several properties and businesses.

His rise to success was accomplished while also secretly transporting slaves to freedom.

His house, where the museum now stands, had a hand-dug room in the basement where slaves would hide. From there, Goodridge would transport slaves across the Susquehanna River to Philadelphia via rail cars with hidden compartments.

In 2003, the property became the first National Underground Railroad Network to Freedom site designated by the National Park Service as a National Historic Landmark.

Kelly Summerford, the recently named director of the museum, said Goodridge's acts of bravery, along with a necessity to recognize African-American historical excellence, is a driving force behind funding what he prefers to call a monument.

Summerford also is a regional actor who portrays Goodridge.

"William Goodridge opens the door to a community of culture," he said. "In many cases, African-Americans are left out of important things in cities, particularly when it comes to monuments. Goodridge did so much early on; he's one of those unsung heroes."

Summerford added the GoFundMe fundraiser is "just the start" of the efforts to pay for the statue — the fundraiser has raised just $245 — and grant applications are in the foreseeable future.

"The statue will teach African-American children about the adversity he faced and how he was still able to take care of his family and congregate wealth," he said. "The youth of that period didn't have anyone to recognize as a hero." 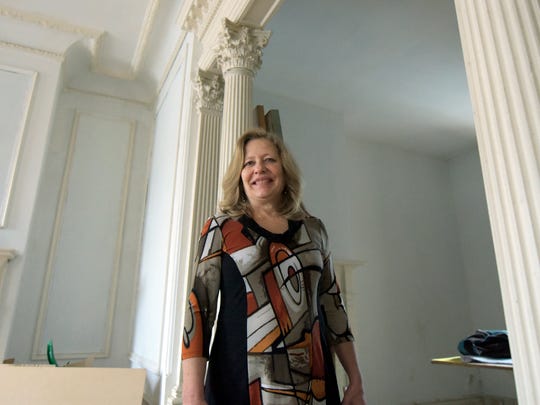 Carol Kauffman, Community Outreach Director of the Crispus Attucks Association, walks through the Goodridge House Tuesday, Feb. 23, 2016. She said she is hoping to open the first floor this May for an open house to celebrate Crispus Attucks 85th anniversary. Bill Kalina photo (Photo: The York Dispatch)

Even for children of other races, he added, the statue would show the worth of African-Americans to the community.

York City Mayor Michael Helfrich echoed the importance of having a statue that represents people of color, citing that they make up nearly 60 percent of the city's population, according to U.S. Census Bureau statistics.

"It's certainly past time that our heroes of other than European decent are recognized," Helfrich said.

The mayor noted that Goodridge specifically is a "hero that deserves to be celebrated."

"Here is a person who under the worst of circumstances was able to use hard work, intelligence and ingenuity to become an extremely successful businessman in York during a time and climate that wasn't exactly supportive of African-American businesses."

Those wishing to donate can do so at https://www.gofundme.com/african-american-statue-fund.