Watch for a wandering wallaby, or a runaway 'roo

People in southern York County are being asked to spring into action if they spot a missing marsupial.

Watch for a wandering wallaby, or a runaway 'roo 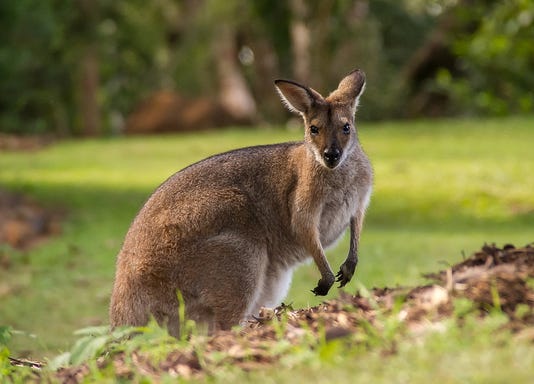 People in southern York County are being asked to spring into action if they spot a missing marsupial.

Rocko, a 3-year-old wallaby or kangaroo, escaped through fencing during recent flooding, according to a Facebook post from owner Toni Kline.

Kline and her husband didn't return phone messages seeking comment, but on Facebook she has described Rocko as both a wallaby and as a kangaroo.

The two Australian marsupials look similar, but wallabies are smaller.

Kline noted on Facebook that Rocko is not socialized and will run if approached by humans.

Southern York County resident Kala Cunningham spotted Rocko from her window on Monday, Sept. 24, and recorded video of him, which she posted on her Facebook page.

"So this is gonna sound weird," she wrote as she posted the video and recounted seeing the animal in her yard.

Kala posted an update later on Monday, saying she'd spoken with Kline, who told her Rocko is a wallaby.

She said Kline is asking that people call her if they see Rocko and that they try to keep an eye on him until she, her husband or their farm manager can get to the location, according to Kala's post.