Republican Rep. Scott Perry and Democrat George Scott's first debate proved to be tame with little rebuttals, but the event heated up when Scott called the Freedom Caucus "obstructionists." 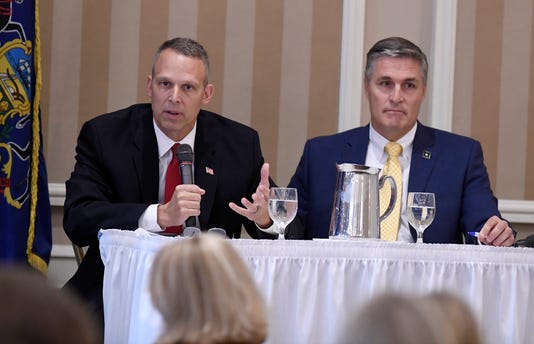 Republican Rep. Scott Perry and Democrat George Scott's first debate proved to be tame, with few rebuttals, but the event heated up when Scott called the Freedom Caucus "obstructionists."

Perry, a three-term incumbent from Carroll Township and a member of the Freedom Caucus, was quick — and passionate — in denying Scott's allegations of obstructionism during the pair's first 10th District debate Wednesday, Sept. 19, at the Country Club of York.

The two candidates answered a variety of questions ranging from gun control to recent tariffs, calmly giving their opposing views with little back-and-forth dialogue during a meeting of the Rotary Club of York.

When speaking about policy issues such as gun control, Perry regularly cited the U.S. Constitution as the driving force behind his rationale — at one point pulling a pocket-sized Constitution from his jacket and showing it to the crowd.

Scott, on the other hand, often emphasized the need for better bipartisan cooperation in Congress to pass laws that would best represent both sides of the political aisle and the people of the district.

Caucus: But Perry raised his voice and went on the defensive after Scott leveled his first blow to Perry and the Freedom Caucus following a discussion on the federal budget deficit and the recent tax cuts passed by Congress and President Donald Trump.

The Freedom Caucus is a group within the House that consists of many members of the Tea Party movement and is unapologetically conservative.

It formed in 2015 in an effort to push House GOP leadership further right on the political spectrum and give more power to the rank-and-file population in Congress.

The caucus doesn't disclose the names of its members, but at least 36 have been identified, including Perry.

Scott channeled the history of inner-party bouts between the caucus and GOP leadership shortly after reiterating his desire for teamwork among lawmakers.

"The Freedom Caucus has been obstructionist on (legislation addressing the deficit), and it's time for them to step aside and allow a bipartisan approach to take on national debt," he said.

Perry was swift to defend himself.

"The Freedom Caucus are the people who are actually trying to save the money," he said. "I just voted against a spending package, and I'm proud of that no vote. Sooner or later members of Congress have to make tough decisions, and I've made them."

Leadership: The second bout came when the candidates were asked about party leadership.

Perry said he has experienced two Speakers of the House — former Speaker John Boehner and now Paul Ryan — and said "they are both fine individuals." 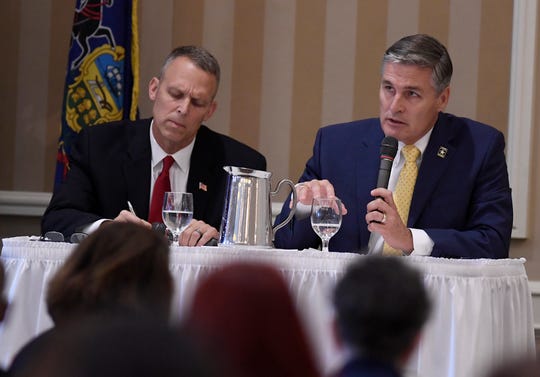 But he added he supported Boehner resigning in 2015 because he had "lost" his ability to oversee the House efficiently.

He instead suggested Rep. Jim Jordan, of Ohio, a founding member of the Freedom Caucus, to become the new House leader after Ryan's term ends. Ryan is not seeking re-election.

Perry released his endorsement of Jordan in July and said Jordan would succeed in allowing Congress to work more smoothly and not hinder rank-and-file congressmen and the legislative process.

Still, Scott used the mention of Jordan as a second opportunity to decry the Freedom Caucus, citing that House GOP leadership didn't like the group even though they are a part of the same party.

"I found it a little bit ironic that when former speaker Boehner left, he cited the Freedom Caucus as a reason for him leaving," Scott said. "Rep. Jordan is a leader within the Freedom Caucus, and I find it surprising that he's who we want as a speaker in an age when bipartisanship is really what we need."

Perry quickly pounced, criticizing Scott for not knowing what the Freedom Caucus does and for following media accounts of the group.

He said the caucus was meant to give more power to individual congressmen so they can effectively vote on legislation, which is "what the voters asked us to do."

"I want to support the people I represent and not the people in Washington, D.C.," Perry said. "I reject the fact that (the caucus) gets characterized by people who don't know anything about it."