A woman carried her son to safety after part of a ceiling collapsed in their Shrewsbury Twp. apartment, the township's fire chief said. 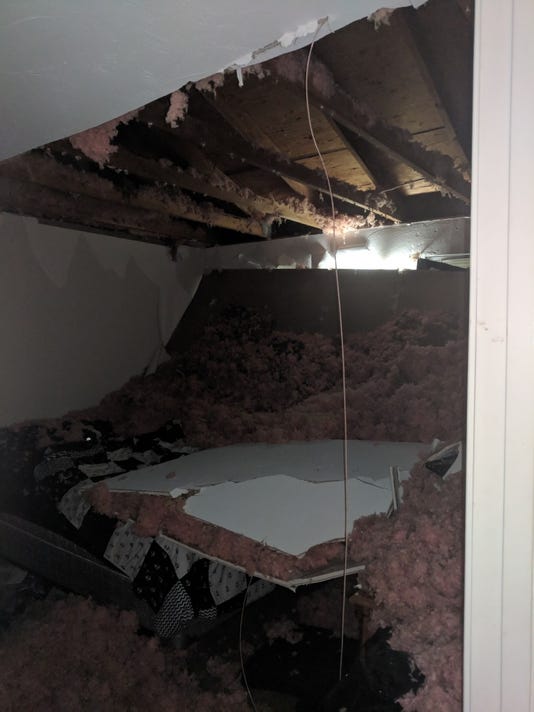 A ceiling collapse pinned a 5-year-old boy in Shrewsbury Township Wednesday night, according to a fire official. The boy's mother pulled him from the collapse. Photo courtesy of Shrewsbury Volunteer Fire Company.(Photo: Submitted)

A woman carried her son to safety after part of a ceiling collapsed in their Shrewsbury Township apartment, according to the township's fire chief.

Chief Tony Myers said fire-and-rescue crews were called to the scene of a structure collapse about 10:30 p.m. Wednesday, Sept. 12, in the first block of West Clearview Drive.

The chief said firefighters were told someone was trapped in the debris.

A 5-year-old boy was trapped under the ceiling, which was partially hanging down, according to Myers. The boy's mother got him out from underneath the collapsed ceiling, according to the chief.

"When we got there, all occupants were safe, sitting in the front room," he said.

The child was examined by an ambulance crew but was not transported to the hospital, according to Myers.

The chief said the mother was told she and her child shouldn't stay in the apartment Wednesday night. He also said it's not yet been determined how long the family will be out of their home.

Officials aren't sure what caused the collapse, according to Myers.

"We don't think it was weather related," he said.

The chief said firefighters didn't have to do anything other than evaluate the building. He said the utilities to the apartment were not affected.

Myers estimated crews were there for about 30 minutes.