York City has received $150,000 from the state government to help grow its anti-gun violence initiatives.

The funding is just a slice of the $1.5 million announced by Gov. Tom Wolf in a Friday, Sept. 7, news release to be dispersed to eight municipalities working to address gun violence through a variety of programs.

“This funding to help municipalities address their specific needs to reduce gun violence is an important step to protect Pennsylvanians and make our communities the safest they can be,” Wolf said.

GVI initiative: In York City specifically, the funding would help bolster the Group Violence Intervention (GVI) initiative that began in February 2017 after roughly 18 months of planning.

The GVI initiative is modeled after nationally renowned criminologist David M. Kennedy's work in Boston in the 1990s.

So to reduce violent crime, law enforcement has to identify and target that small group of people, who are often involved in gangs or the drug trade, or both. Those targeted during call-in presentations then carry the message back to their associates. 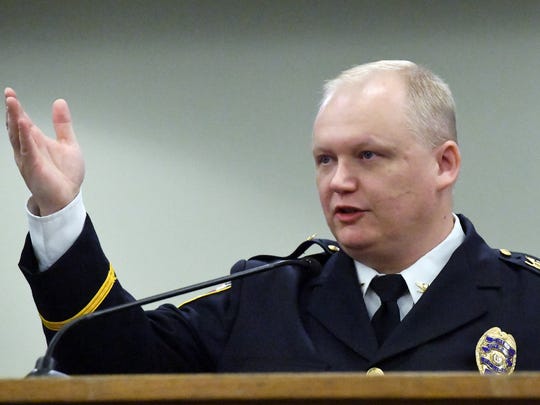 In December 2017, the city had 32 total shootings for the year — only half of the shootings seen in the year prior, a drop attributed the success to the GVI initiative.

But the city has seen 37 shootings so far this year, which Bankert said was a result of "a bad first quarter."

However, the chief added the efforts "appear to be back on track."

He also clarified progress of the GVI initiative is based on "data measured by both statistics and the qualitative objectives such as cooperation with other law enforcement agencies and community groups" over a three-year period.

The city is halfway through the three-year GVI program.

Four shootings have taken place in the city since Bankert's comments, when only 33 shootings had been recorded.

Expanding GVI efforts: York City Mayor Michael Helfrich said the funding would help grow the city's efforts not only through additions to the program but also through more staff.

First, the money allows the city to hire a full-time employee to oversee the entire GVI program.

That individual would work directly under the mayor and work with the police chief and the GVI lead in the department, a position held by LifePath Christian Ministries CEO Matthew Carey, Helfrich said.

The GVI efforts had previously focused on monitoring and tracking group violence in the city as well as offering alternatives to those who might be at risk for becoming involved in violence, the mayor said.

But efforts have been growing and now include the Community Police Response to Victims of Violence, a program where the city reaches out to victims of violence to show unity and offer help.

"Now it's not only about those that are potentially committing violence, but also about how we address the victims of the violence," Helfrich said. "We want to make sure we're showing that we care about the people in our community, and we want to do everything we can to make sure their life gets back on track."

The efforts to reach out to victims is also to "stop any type of retaliation and make sure they realize we're on their side," he said.

The mayor added he's already seen changes stemming from the GVI program, including more organization and collaboration in the city's efforts and harsher prison sentences for those who commit violent crimes.